Florida in March is not too tough to handle. The warm sunshine provides the perfect setting, especially consid-ering we were about to push the limits of a 525hp Mustang. For that, we left the chilly Northeast and traveled to Moroso Motorsports Park, located in the West Palm Beach vicinity, where we were introduced to the latest Steeda-the limited-edition supercharged Q 525. Our mission: To take it from the starting line to the finish line as quickly as humanly possible-in one piece, of course.

On this day, only a few got to taste the bright Q 525, as it was the only one in exist-ence, and final driveability tuning wasn't even complete. Nevertheless, MM&FF was given the go-ahead to run 'er hard.

And that was a good thing because low elapsed times don't come from pussyfooting. We heated the tires, staged, and dropped the clutch. That's when the 5-liter mod monster came alive with angry intentions, revving through First gear like a hungry bear at a campsite. We were off in a yellow blur, pegged firmly in the seat with the Three-Valve revving furiously. The polished Magnuson blower produced that terrific whine, and the BFG Drag Radials bit hard into the surface. We knew immediately there was something special under the cowl hood, but we had no time to think-6,200 rpm came up quick, and we snatched Second gear, lifting just a bit in the process. The tires broke loose in bold disagreement, but they recovered quickly, grabbing the strip and driving the Steeda like a brave warrior into battle.

The Q was on a mission ripping through Second gear, so we jammed it into Third, then plugged it into high and rode the Mustang to the 1,320 mark at 118.74 mph. It ran 11.76, but that was far from maximized. This would prove to be our quickest run of the day, however. The tune was on the rich side because this was the Q's first trip to the track. The project had just come together days prior to the press event, but the folks at Steeda were confident enough to let us wring out the blown Three-Valve stroker, albeit, with Chris Johnson from SCT data-logging and tuning the engine as we went. According to Johnson, "The air/fuel ratio and the timing curve were kept purposely safe."

Inspiration for the Q 525 comes from Steeda's President Dario Orlando. "The Q 525 is an American performance car that goes after the exotics," he says. "It will be a limited-edition model of maybe 20 or so units. But the parts will be available and can be purchased through Steeda. It has all the creature comforts, like a back seat and a trunk, but this is a serious performance car, and the engineers at Steeda have paid careful attention to vehicle dynamics to give the Q 525 world-class ride and handling."

The Mustang is fully reworked throughout, but owners will proudly pop the hood to show off the powerplant-a big-bore Three-Valve that gets boosted by MagnaCharger's 5th Generation MP 112 hybrid blower with an internal bypass valve. "The supercharger provides instantaneous boost from 1,200 to 6,000 rpm, and the unique valve is responsible in eliminating parasitic drag from the crankshaft," says Austin Craig, vice president of marketing at Steeda.

A Ford aluminum block is used as the foundation and is assembled with a steel crank, Manley rods, and 8.5:1 Diamond pistons. Bore is 3.70, while stroke is stock at 3.54 inches, for a total of 304.5 cubes.The heads and cams are stock, but breathing is enhanced with Steeda's cold-air inlet, headers, and after-cat exhaust. The engine also features a 62mm, twin-bore throttle body and a Steeda/SCT air meter. The polished blower fills the manifold with 10 psi of boost, and with that the 50-legal package develops an honest 500 hp at 5,400 rpm, with 536 lb-ft of torque at 3,650 rpm. By the way, that's at the rear wheels. 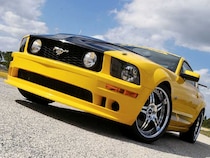 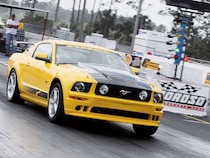 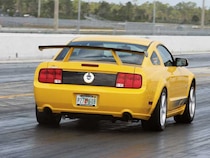 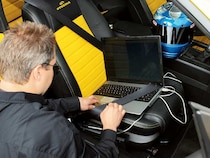 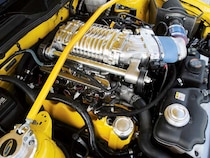 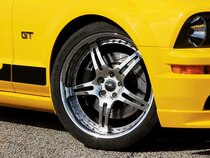 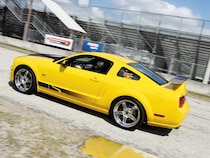 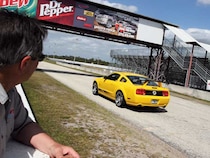 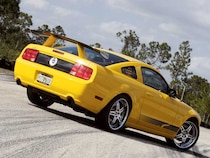 The engine is linked to a SPEC clutch, which we found to be finicky. Its feel was OK during normal driving, but there seemed to be too little release, or air gap, and that caused problems when we tried to powershift. On the bright side, it never slipped or broke. Gears in the transmission are manipulated with a Steeda shifter, and the 8.8 gearing has been bumped to 3.73s.

Steeda believes it has the best suspensions in the business, and its success comes from production-based race experience and by working with engineers and customers. For this special model, the company went with its Sport Springs, camber adjusters, control arm relocation kit, bumpsteer kit, adjustable endlink kit, G-Trac brace, strut tower brace, billet trailing arms, and Tokico D-Spec dampers. It also has Steeda-spec antiroll bars, a Panhard bar, and a three-point frame and torque box brace kit. Essentially, this is the same as what we sampled in the December '05 issue when we tested Steeda's Q 400.

The chassis and suspension did fine during the limited seat time on the dragstrip and the Moroso 2.25-mile road course. Acceleration was awesome, but in the turns, oversteer was the prominent characteristic, at least on the 20s. It remained very flat, and we could sense the steering was responsive, but the tires limited how hard we could push. We didn't get to drive it on sticky R-compound tires, which would have been matched better to the power and suspension.

"We are the leaders in production-based racing," says Orlando, "We use science and real-world testing to achieve the desired character-istics and ride quality. There are formulas to get you in the ballpark, but we use skidpad data, along with actual driving impressions on the street and track when developing a new sus-pension. Working through the Ford/SEMA technology transfer program and, with Tokico, we arrived at rates that are about 30 percent stiffer than stock; otherwise it will be too stiff for the road."

Mechanicals aside, this Mustang is flat-out racy. The bodywork is clearly '00 SVT Cobra R-inspired, and like the R, it's functional and good looking. Up front is a low chin spoiler, er, splitter, which, at speed, helps plant the nose with downforce. Its lines follow the factory curves, and the openings can be fixed with air ducts or lighting. The cowl hood is also designed to enhance aerodynamics, and control underhood pressure and flutter found at speed with the stock hood. As for the towering rear wing, it forces the tail into the track and is a touch smaller than the one found on the '00 R. Some may find the pack-age overly aggressive, but we love it.

Steeda didn't forget to pamper the occupants, either, as the seats have been reskinned to match the paint, and the aforementioned Steeda shifter has been installed along with Steeda gauges. There's plenty of billet, too.

Overall, we enjoyed our short drive in the limited-edition Q 525. According to Orlando, it is slated to sell for under $60,000, and that impressed us. That includes the 1-year Steeda warranty.