We put an 800-RWHP MM&FF winner through a torture test to prove its roadworthiness.

What defines a street car? Everyone seems to have their own opinion--to some it's a Pro Mod car with mufflers; to others, it's gotta-have A/C and can sit in traffic without incident. For us, the MM&FF True Street Challenge differentiates the real road warriors from the race car wannabees. This class requires you to cruise your registered and insured Ford on the street and then make three consecutive strip passes--no cooldown, no opening your hood to make repairs, no refueling.

Still, there are doubters. Despite the 30-mile cruise, some critics say True Street is not the ultimate test. To prove these folks wrong, we decided to put True Street on trial. We invited the '05 Fun Ford Epping True Street champion, Stephen Harvey, to our neighborhood. The idea was to put his car through a torture test it wouldn't soon forget.

Stephen's pride and joy was going to be driven on city streets for several hours. It was subjected to severe traffic (in summer heat, no less) as we gave each horsepower a thorough workout--all 800 of them. That's right--800 hp at the wheels through a heavy, power-robbing AOD transmission. If you're thinking that 800 rwhp (approximately 1,000 hp at the flywheel) is too much for a street car, then perhaps you need to check what's inside your pants.

Despite the naysayers out there, we are convinced that Stephen's '94 Mustang GT is the real deal. Its performance on the track and its street manners are rivaled by few, if any, other cars on the road. This Stang represents everything 1,000 hp shouldn't be--it's tame, the A/C blows cold, and the transmission shifts into Overdrive. It has a race weight of 3,800 pounds and will have run nines by the time you read this. Hell, this thing even has a road-race-inspired suspension if you want to hit the curves.

The car acts like a modest professional athlete who downplays his performance during the Super Bowl MVP press conference. But once you slam the throttle down, the story is altered. Like that MVP, the attitude changes instantly and you have something that is way above normal--an extraordinary performer no matter whether it's in a dyno room, the street, or on the dragstrip. If there's a competitive environment, Stephen simply needs to step on the go-fast pedal and hold on tight.

While sitting in city traffic, you can't help but marvel at the fact that this Mustang produces over three times the horsepower of anything else around you. The great part about it is that no one has any clue as to the raw power under the hood. The idle is barely noticeable as the custom stereo system is blaring the tunes and the A/C is protecting you from the nasty Northeast heat and humidity.

The engine combination sounds simple enough if you have the money to throw at LaFerriere Racing (Johnston, Rhode Island). Proprietor Eric LaFerriere selected the best parts to ensure reliability. The starting point is an A4 block. "This is one of the features that allows me to sit in bumper-to-bumper Lincoln Tunnel traffic for an hour and a half and not overheat," Stephen says. 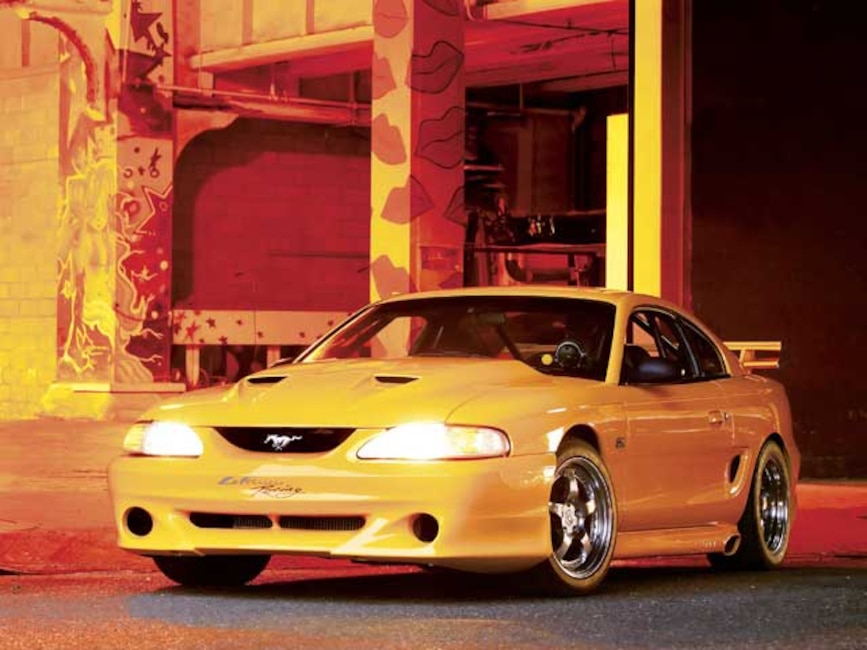 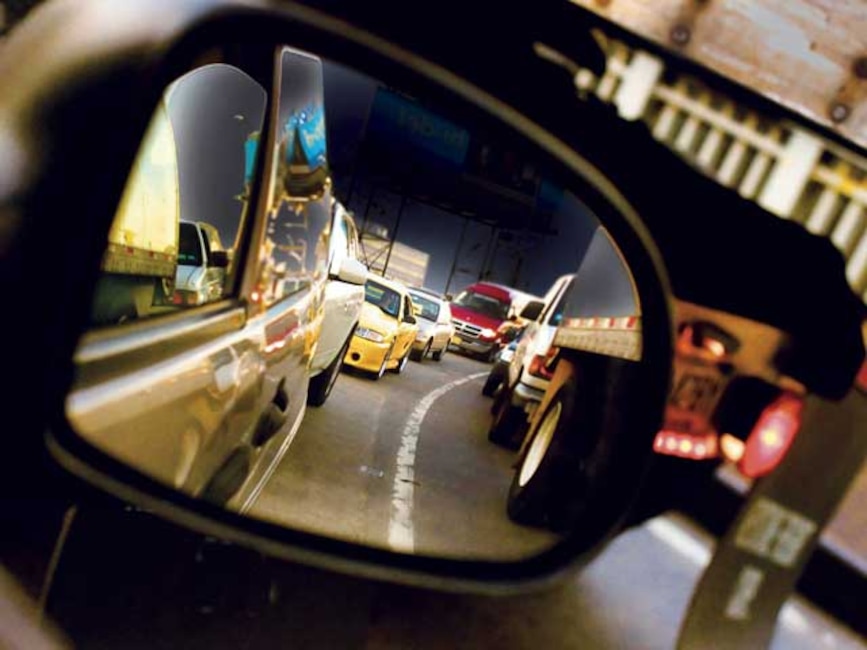 If you doubt our claim to having thrown Stephen Harvey's '94 Mustang GT into city traffic, then check out this picture as we waited in line to enter the Lincoln Tunnel. The photo was shot through the side-view mirror of the MM&FF Big Pimpin' Van. 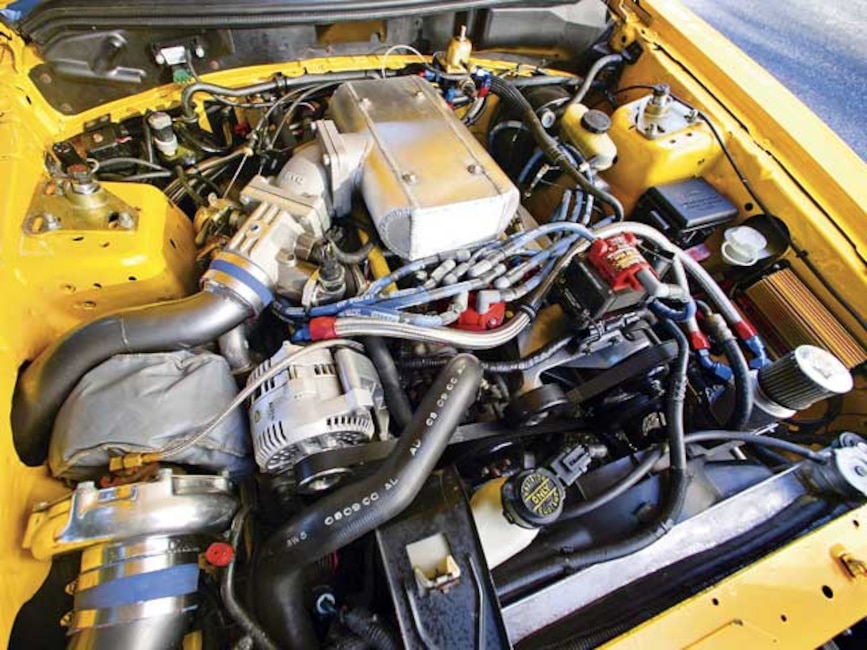 Here is Stephen's money-maker--310 ci of small-block Ford fury built by LaFerriere Racing. With 800 hp on tap to the tires in low-boost conditions, this is an engine you don't want to pick on. 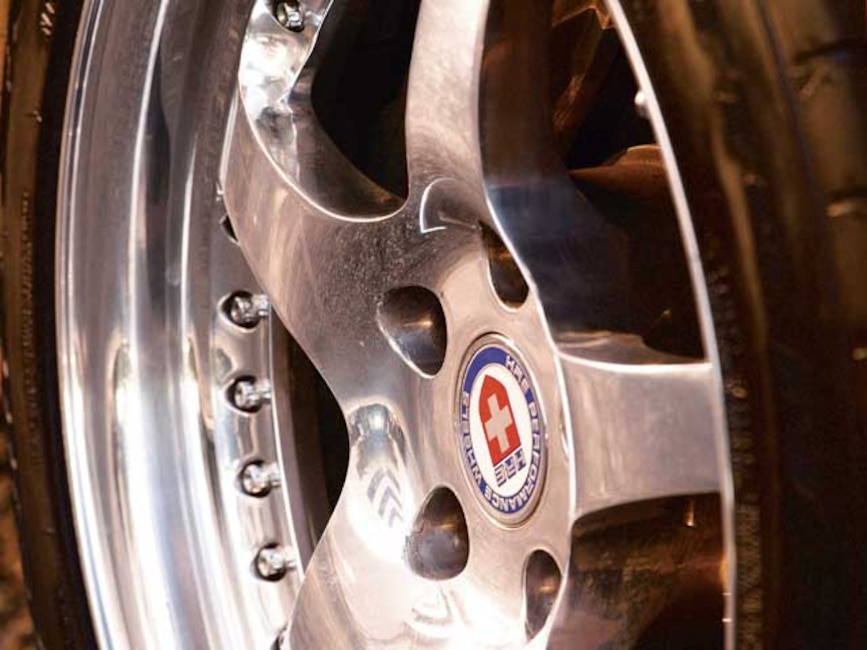 HRE wheels adorn the four corners of this street beast. The 17-inch wheels have a set of Nitto 555 Extreme rubber wrapped around them. 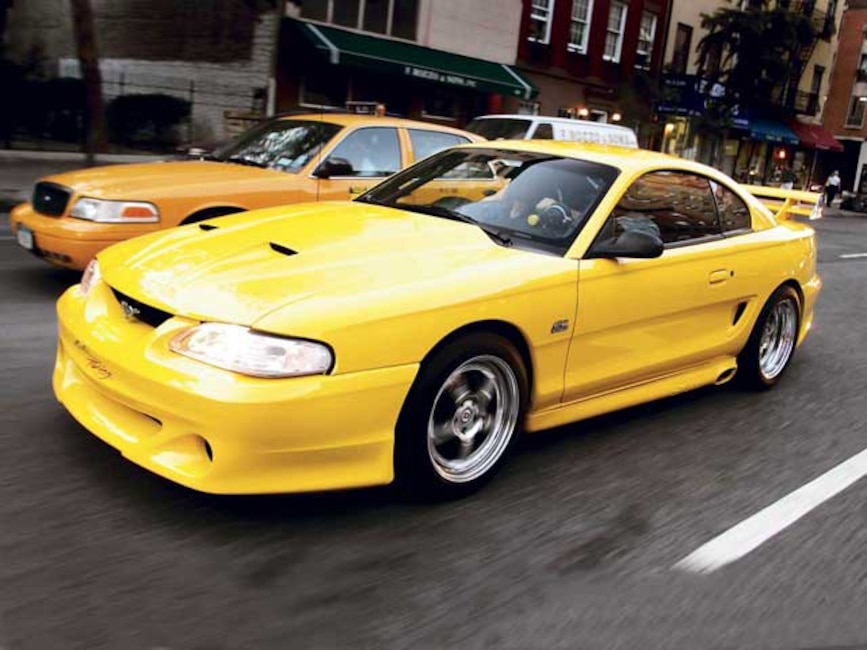 The NYC cabbies have finally met their match. There's no way the yellow cabs could outrun this thing from the stoplight. 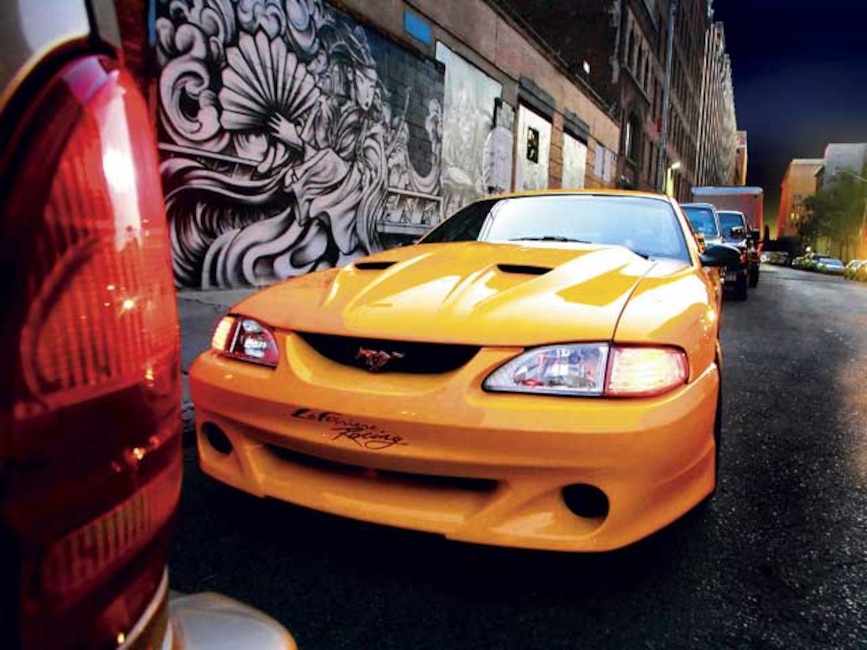 A Cam Motion roller camshaft of unknown dimensions controls the opening and closing of the valves. We prodded Eric to give up the specs, but he was tight lipped about 'em. Fox Lake Power Products is responsible for the modifications on the TFS Street Heat cylinder heads. The aluminum heads feature a Stage 3 port job. Intake valves measure 2.020 inches, while the exhaust side checks in at 1.600 inches. Harland Sharp shaft-mounted roller rocker arms are another piece to the valvetrain puzzle. Cartech supplied the sheetmetal box-style intake manifold with tunnel ram lower.

The custom single turbo system features a large air-to-air intercooler and a Turbonetics T76 turbo. At the time of the photo shoot, the boost level had not exceeded 15 psi on the dyno. Tuning turbo engines is critical to their performance and survival, so Eric called in expert tuner Job Spetter Jr. of Turbo People of Hastings-On-Hudson, New York. The car was flogged for several hours on the chassis dyno and on the streets to get the fuel and timing tables perfect. Job relies on a DFI Gen 7 computer system to control everything. The Weldon 2015 fuel pump, Weldon fuel-pressure regulator, 96-pound injectors, and enormous fuel lines feed the pump gas to the hungry engine.

To assume this is just a '94 body with a muscular powerplant would be a huge mistake. Inside and out, Stephen has replaced virtually every major component, from the custom stereo system to the custom leather-wrapped seats. The Mustang can handle just about any bump or curve the road can throw at you. Out back, a Steeda 5-Link rear suspension has been installed along with a pair of Tokico five-way adjustable shocks. A Panhard bar is included in that system along with a thick antiroll bar. The subframes are tied together with custom "through-the-floor" connectors. A 10-point 'cage is a key factor in stiffening the Stang as well as meeting NHRA safety requirements.

Bringing the 3,800-pound behemoth to a stop is a set of Baer Competition Pro Brakes. These babies aren't ordinary brakes, either. Like everything else on the car, they are at the top of their class with the 13.75-inch rotors in the front and 12-inch rotors on the back. The calipers are a top-of-the-line, six-piston setup. Eric kept the stock antilock braking system operational.

The looks are just as important when you evaluate the entire package. Stephen tapped a few different styling sources when he decided to make his car look apart from the rest of the Mustang crowd. Cervini's Auto Design supplied the Stalker hood, front fascia, and rear valance. He then turned to an old set of side skirts with side exhaust openings. After these photos were taken, DMC Racing fabricated a custom set of tailpipes that exit through the side skirts. A Saleen S351 rear wing sits on the trunk lid. The paint is the same yellow stuff that was applied at the factory.

The front suspension is all Steeda, as well. Eric installed a Steeda Hardcore tubular K-member and A-arm assemblies. He also turned to a set of Tokico five-way adjustable front struts with a Steeda coilover kit. Expensive HRE three-piece wheels add a bit of flavor to the entire package. These babies check in at 17 by 9.5 up front and the back units measure 17 by 11. They have been wrapped in Nitto 555 Extreme meats for street use. At the track, a set of Mickey Thompson ET Streets apply the power to the tarmac.

Stephen has a full view of the assorted Auto Meter gauges and can easily reach the stereo head unit to change the channel or pop in a CD.

The two-tone seats were custom upholstered to match the interior and exterior. An NHRA-legal 10-point 'cage fits nicely and is not burdensome to the driver or passenger.

The custom-made turbo system features a Turbonetics T76 turbocharger. An air-to-air intercooler chills the hot turbo air before it makes its way into the Cartech manifold.

An 8.8 rearend has been called upon to handle the madness from under the hood. A set of 3.55 cogs keep the rpm manageable on the highway while an Eaton differential and Moser axles send an equal amount of power to each tire. The car's best time thus far has been a 10.01 at 135.95 mph--that pass was recorded with a terrible (by drag racing standards) 1.54 60-foot time. It was also accomplished with less than 15 psi of boost. The goal is to turn up the boost more and make a few chassis adjustments to get the car to hook. With those adjustments, this Stang should run 9.60s as it has the power to do so with ease despite its overweight condition. Stephen had a three-run average of 10.33 as he claimed victory at FFW-Epping this past summer.

We put this Stang to the test to make sure our True Street requirements are keeping the trailer queens on the show grounds. After 41/2 hours of driving in stop-and-go traffic and highway runs, Stephen's claim to the True Street trophy from the FFW-Epping event is indeed legit. We can't wait to see how fast he runs when Eric turns up the boost to 20-plus psi--will it run low nines at 150 at 3,800 pounds? Anything is possible when you put your mind to it--even making 1,000 hp with a street car.