We take Jack Roush's '05 Stage 2 Mustang to the limit and back.

When the Torch Red Roush Stage 2 tester arrived on our doorstep, we were almost burned by the intensity of the heat. With only 45 miles on the clock, it stood boldly with the authority of a heavyweight fighter. We didn't get out of the MM&FF lot before eyes popped and questions flew our way.

The Le Mans stripes flowed over the race car-like skin. The body's low stance is the way all Mustangs should sit (not on their tippy-toes as they come from Ford). The wheel and tire combo glistened, and after cracking off the throttle a few times, we couldn't wait to turn those BFG tires in anger. This car was going 100 sitting still--it even attracted the attention of the local law. Thankfully, the officer was a car dude who simply wanted a closer look.

Over the past decade, Roush Performance has gained prominence with an incredibly strong lineup of Stage 1, 2, and 3 Mustangs, as well as other special-addition models, many of which have been among the best-performing "tuner" cars (if we dare call them such) on the market. Roush also cranks out OE-quality aftermarket parts and a wide assortment of crate engines.

Like the earlier SN-95-based Roush models, the latest is a winner. Each Roush Mustang starts as a new Mustang GT, which is morphed into a killer for the street or track with a much-improved balance of horsepower and handling. In addition, Roush adds his unique styling. And that's exactly why we were jazzed about getting our paws on this snazzy Stage 2. "The design direction of the stock '05 Mustang GT couldn't have been any better for application," Jack Roush says. "Our design theme, since we created the first Roush Mustang, was connected to my traditional design preferences."

You won't need a ruler to figure out that the Stage 2 is slammed and slathered with goodness. And this comes by way of a revised suspension, a six-piece aerobody kit, 18-inch wheels and tires, a boisterous rear-exit exhaust, lower valance foglamps, embroidered floor mats, and Roush badges.

Roush Performance engineers spent about a year developing the suspension package that uses specifically designed springs, struts, and shocks to provide improved handling and good ride quality. Where some specialty Mustangs leave you begging for mercy over the long haul, there is zero degradation in the ride quality of the Roush versus the factory GT. This is the result of tons of testing and a decree from Jack Roush himself that it would have to ride as well as stock.

"We used our previous generation Stage 3 Mustang as a minimum performance level starting point for our development work, and then we raised our targets from there," says Roush Performance Engineering Manager Paul Burke. "We placed a high priority on preventing NVH [noise, vibration, harshness] issues that can accompany suspension part changes, while developing ride quality that wasn't harsh, and closer to a production performance car feel. The result is a complete suspension car tune that can pull over 1.02 g's of lateral acceleration on a skidpad, provide exceptional handling at the track, and is enjoyable to drive for long distance."

We put the Stage 2 to the test in the real world and it proved to be everything Burke said. The suspension flat-out worked, as we proved on our 13-turn handling track as well as the quarter-mile strip at Englishtown's Raceway Park. 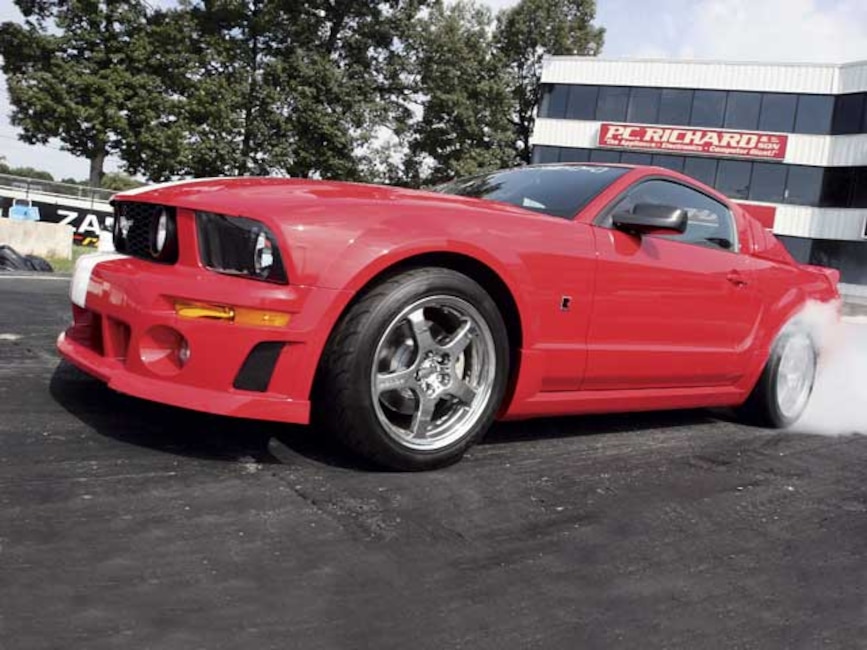 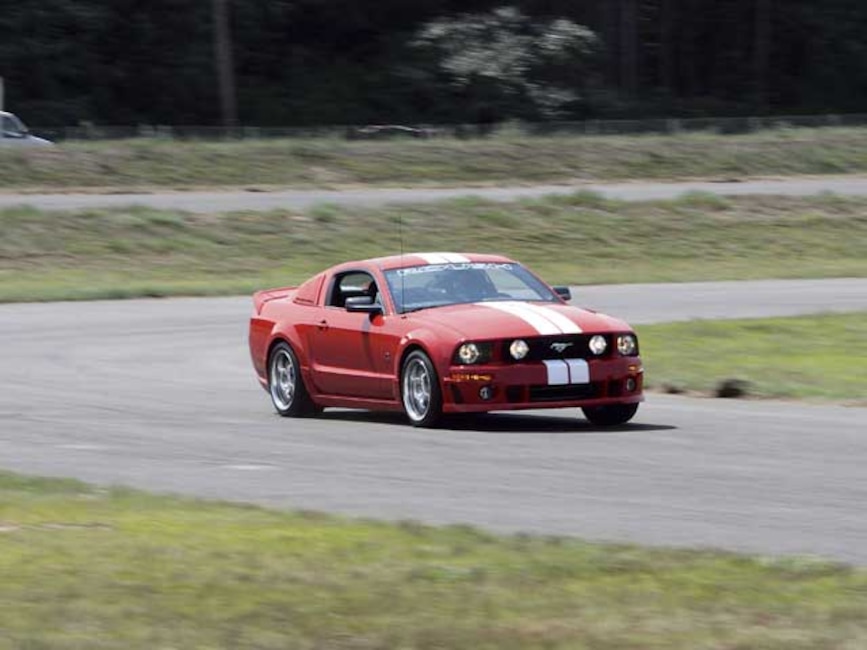 The Stage 2 performed as expected on the strip, but it far exceeded our expectations on the closed road course. The Roush Mustang is lower by 1 inch in the front and half an inch in the rear. Handling was dead neutral, and grip was far better than expected. 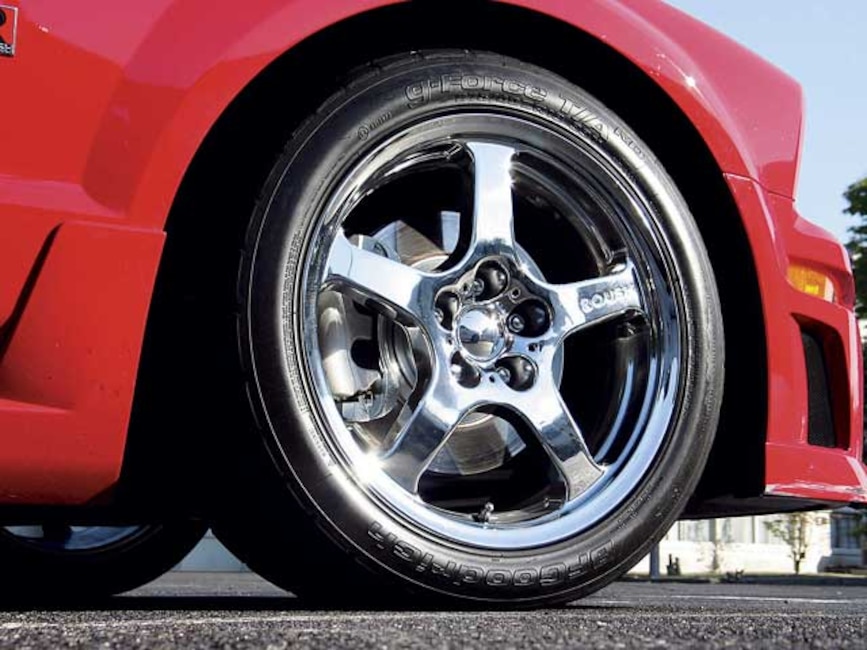 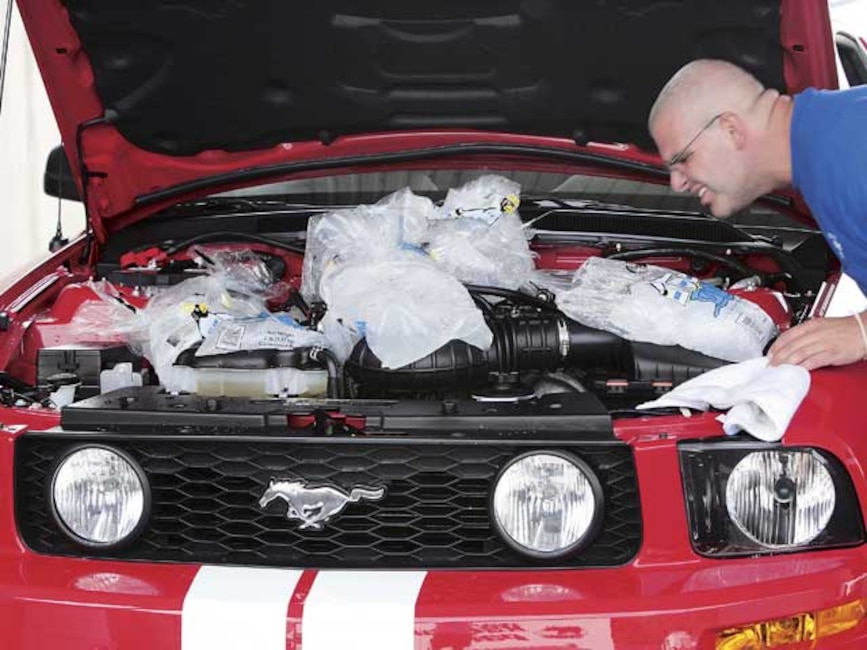 Temperature was in the 90s on test day, so we cooled the plastic intake with plenty of ice. 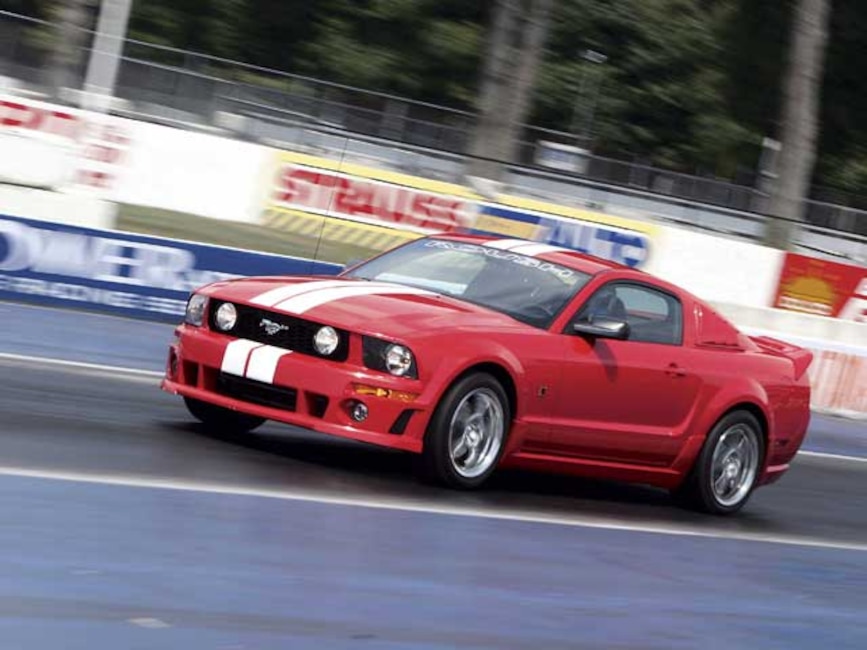 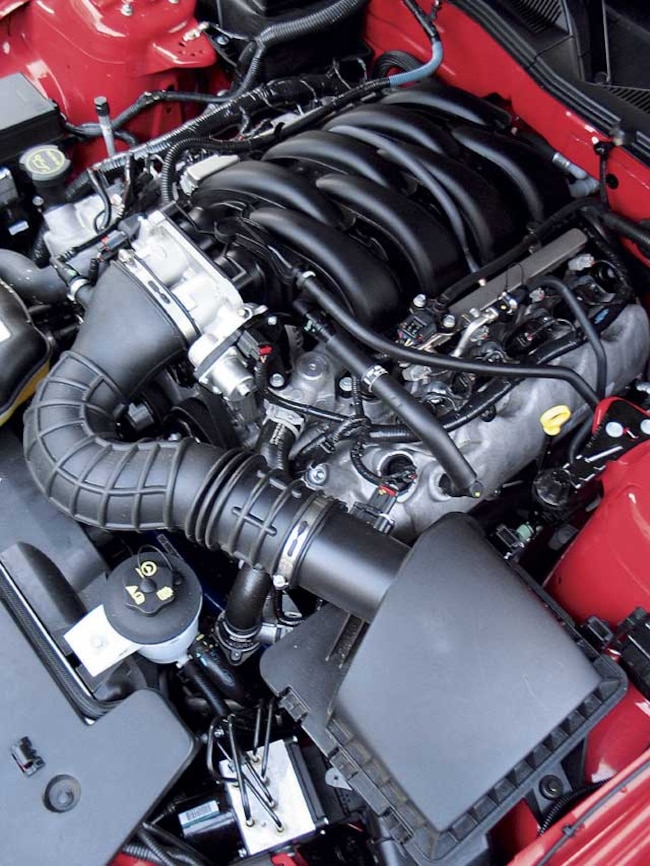 The powerplant in the Roush Stage 2 is the same as found in the standard Mustang GT. It makes an honest 300 hp and can get the Roush into the mid-13s with ease.

In the dog days of summer, we clocked a best of 13.55 at 101.09 mph on the dragstrip, and on the road course, the Roush laid down some of the quickest lap times of all the cars we've ever tested, Mustang or otherwise. Our best lap time in the Stage 2 was 1:24.94--only the modified Ford GT supercar ("And Fast Fords," May '05) has navigated our track quicker--and we averaged in the low 1:25s lap after lap. On a cool fall day, a few weekends later, we saw our best lap time plummet to an unreal 1:23.29.

Rather than plow through the turns as '05 stockers do with an abundance of understeer, the Roush was flatter and had a neutral feel. The tailored spring and shock package did wonders for traction by keeping the tires compliant with the track. And that allowed the big BFGs to provide plenty of grip. This balance allowed us to drive deep down the straights and turn in with great accuracy and control. Therefore, we were able to get aggressive on entry and on exit. And all this from a Mustang with excellent street manners; we were shocked.

Moreover, all the other Mustangs that have run close to this on our handling course had larger-than-stock brakes. The Roush Stage 2 relies on the factory binders. Had we more adequate stopping power, we may have been able to go into the corners hotter, thus reducing our lap times further.

Tony Marszalek, vehicle marketing manager at Roush Performance, says, "We saved all [the engine mods] for the Stage 3. It would be so expensive to certify the car for EPA and CARB that it would have priced the car out of range. The Stage 1 is a cosmetic upgrade, Stage 2 is cosmetics and handling, and Stage 3 will have everything."

Unfortunately, in the real world, people asked, "How fast is it?" and "How much does it cost?" Quite frankly, it was awkward explaining that Jack Roush's $40,000 special has the same power output as a stock Mustang.

But even with stock power, the Stage 2 drew rave reviews. People stopped in front of your author's house and whipped out camera phones. Necks snapped around when I drove by on the interstate, and I got "thumbs up" from more than just Mustang owners. One Stang pilot was so distracted he literally drove over a curb, putting two wheels off the road.

To achieve the racy look, Roush blessed the Stage 2 with a new front fascia with a low, driveway-scraping splitter, functional openings, and a pair of foglamps. The new nose was engineered to be configured with a number of openings. This means it can work with a heat exchanger, intercooler, or brake cooling system--talk about form meeting function. Down the side are rocker panels that blend neatly with the doors and bring the body of the Mustang closer to the pavement. The rear valance is also lowered and styled to match, yet it allows the stylish rear-exit exhaust tips to shine. To complete the package, Roush chose a decklid-mounted spoiler that wouldn't be out of place on one of his Nextel Cup cars.

You can expect to pay $11,245 over the base GT price for the Stage 2 package, which includes the aero kit, the aforementioned suspension upgrades, embroidered floor mats, and Roush dash badge. Our tester had the optional racing stripes ($530), white-face gauge cluster ($390), Roush interior trim kit ($350), Roush aluminum pedal kit ($150), locking lug nuts with key bag ($60), and the Roush rear quarter-window louvers ($315). With these options and transportation charges, the total MSRP came in at $40,220. We will say the pedals made heel-and-toe driving a pleasure, and the carbon-fiber trim package added some charm to an otherwise stark interior.

For 40-large you get a complete Mustang with an engineered package, honest performance, awesome styling, and a three-year/36,000-mile warranty. The car is certainly hot, but we can't wait for the Stage 3 model that's slated to have a Roots-style supercharger and 425 hp. Once it arrives, you'll be able to get a taste of this champion with Stage 1-, 2-, or 3-weaponry.

Our tester had a base Mustang interior that was upgraded with optional gauge package and trim kit.

Roush's optional white-face gauge cluster includes a speedo and tach that are light years easier to read, especially on the track, than the factory "down in a tunnel" dials. Electroluminescent lighting recalls Roush Mustangs and SVT vehicles from days past.

Smokin' the hides was not a problem, even with the stock 300hp 4.6. Though popular on the earlier Roush models, side exhaust will not be available on the current cars.

Even with stock GT brakes, we lapped the 13-turn track in 1:24.94. That's quicker than anything we've tested short of the Ford GT.

There seemed to be no middle ground on the rear quarter-window louvers. People either loved 'em or hated 'em.