The Top-Of-the-Line Boss Above and Beyond

Steve Turner Former Editor, 5.0 Mustang & Super Fords
November 26, 2012
Menacing is about the only thing you can say to describe this black Steeda Boss LS.

Lock eyes on this '13 Mustang and you instantly know it's something special. Sure the massive wheels are an instant giveaway, but the ground-hugging stance hints that there are more mods than meet the eye.

Are those Boss decals? Yep, the low-key decals show this is Ford's corner-carver. Wait, is it a Laguna Seca? That's right! One of the rarest Bosses around. And it has Steeda decals too. It's a Steeda Boss LS!

Having spent plenty of time in a variety of stock Boss Mustangs, we are well-versed in how they feel right off the dealer lot. They are well ahead of the GT in the handling department, and the Laguna Seca is just a couple ticks better than the base Boss. You might assume that there's nothing left to make these car better. That's just not the case, as evidenced by the car on these pages.

"The engineers at Ford Motor Company did an amazing job at developing a track-ready vehicle right off of the assembly line. It was only logical that we took their outstanding platform and made it an even better-performing track vehicle for the niche performance enthusiast," said Steeda's president and CEO Dario Orlando in our last installment. "By adopting our ISO-engineered-and-manufactured products that are also track tested under the most grueling conditions, we were able to still substantially improve upon the Boss 302s performance levels without compromising the integrity or NVH of the vehicle."

If you were looking to state a case that you know how to make a modern Mustang handle, why not take the factory's top-shelf handler and try to improve upon it? Of course, you have to measure the improvements, and Steeda turned to the skidpad to do so.

"...Remember that a skidpad measures the amount of lateral, or outward force that a tester could make the car obtain while turning around in a circle (typically a 300-foot circle). The idea is to run the circle just to the point where the tires give and measure the amount of centrifugal force," Dario explained. "The 'g' is representative of the force of the earth's gravity. If the vehicle is pulling 1.00 g on the skidpad, then the outward (i.e., lateral) force will be exactly equal to the force of gravity. The better a car's tires and suspension, the higher lateral force it can withstand without breaking away."

Obviously, removing some of the play in the factory bushings, and installing a completely adjustable suspension -- from coilovers to sway bars builds upon the stellar foundation that Ford laid out with the Boss platform. The Watt's link offers more precise lateral control. These changes resulted in this car pulling 1.03 g on the skidpad versus the 0.99 g it pulled in stock form. A stock Mustang GT is typically good for 0.91 g on the skidpad.

"What should be noted is that while numerically the difference between 0.91 and 1.03 is small, on the street and on the track it is a huge difference. The increased level of performance directly correlates to the level of fun one can have on the street as you throw the car into one of those winding, twisting curves and on the track, it is the difference in being a winner or a loser," Dario added. "When we develop a tuned suspension system for a car, no matter if is a Mustang GT, Ford Focus, or even the Boss 302, we sweat the smallest of details so that we can optimize the level of performance..." 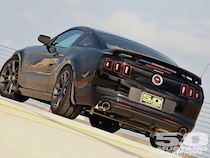 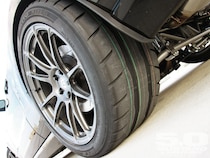 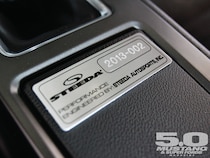 That sort of performance puts the Steeda Boss 302LS in supercar handling territory. Of course, we'd have to drive it know for sure. Squeeze on the throttle, shift it into Third and this black Laguna Seca digs in. You feel the pull of the gravity as it sweeps through the corner as flat as a level. There's a car ahead. The Brembos reel it in and the nose just doesn't dive. Perhaps even more impressive is that it rolls with the punches of the uneven pavement. Sure, it's taut, but it doesn't work you over like an MMA fighter.

Of course, like a cage-match brawler, this special Boss has had its muscles pumped up a bit. You can hear it and feel it. Air rushes through the open-element filter into the engine and barks out the Steeda mufflers. The RoadRunner engine pulls just a bit more urgently, and its reflexes are hastened without shedding driveability. It doesn't throw caution out the tailpipe like the TracKey, but the custom Steeda calibration does make the driving more fun for the street.

Our brief spin in the Steeda Boss proved its an impressive ride. Getting behind the wheel made us consider how much fun a Mustang GT would be with these same mods. That's the beauty of Steeda's business model as both a parts manufacturer and a builder of serialized Mustangs. You can purchase a complete car, like this Steeda Boss, or you can build up your own using the same gear.

Whether you go for a Laguna Steeda like this one or you opt for a revved-up GT, you'll enjoy the drive.

Horse Sense: Steeda Autosports doesn't just build serialized Mustangs GTs, but as you can see, the company tweaks Boss 302s and GT500s too. They also build Steedafied versions of the Focus, Fusion, and Fiesta. 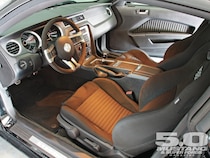 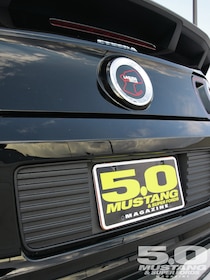 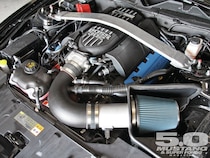