9 seconds...thats the time Evolution Performnace has the '13 Shelby running 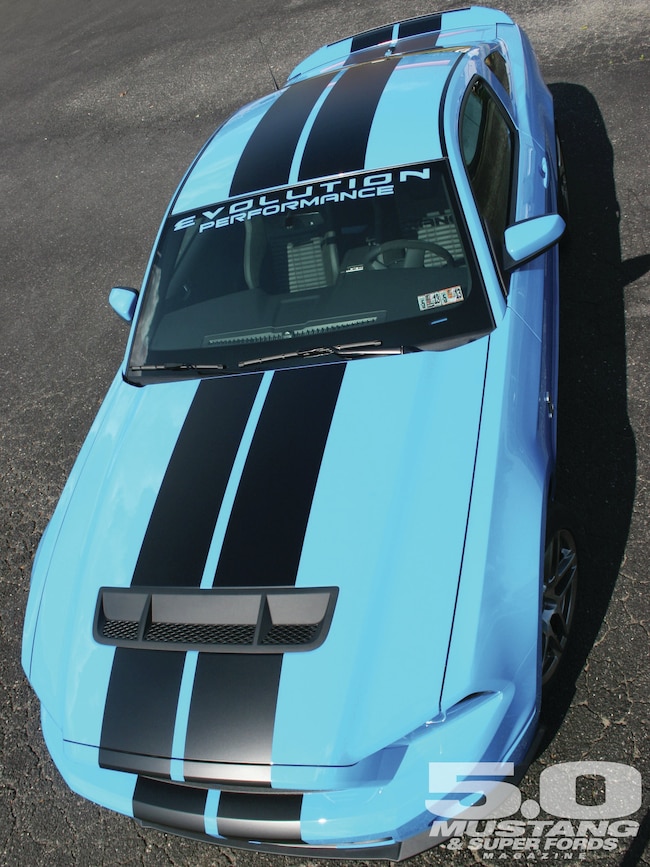 From the moment our friends at Ford's Special Vehicle Team announced the '13 Shelby GT500, we knew it was one for the ages. It would be the stuff of legends in stock form. Once it was released into the aftermarket wild, it would carve new legends into the pavement. To say we were stoked would be an understatement.

Of course, it should come as no surprise that the crew at Evolution Performance was just as excited as we were. Fred Cook, Nelson Whitlock, and crew have made a name for the shop by being first and fast with numerous modern Mustangs, from the preceding Condor GT500s to the current Coyote GTs.

For a year or more, Fred hatched a plan to hit the ground running with the new king of the hill from SVT. Some of the bits were familiar enough, but others required some planning and creative thinking. The programming is a bit different, as is the crank damper. The suspension is the same, as is the throttle body and air inlet.

"We have been gathering information for this project since July 2011," said Fred. "Over the last couple of months, we lined up some great product manufacturers and shared the information with them to ensure this project would be a success.ö

Whether the '13 required new or existing parts, the Evolution crew started compiling gear and planning for an all-out assault as soon as the car arrived at its Pennsylvania headquarters. Of course, modifying a Mustang in the modern era cannot happen without a computer. Thankfully, Evo has a not-so-secret weapon in the form of Jon Lund of Lund Racing manning the laptop. 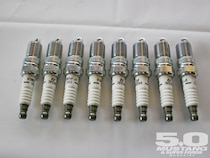 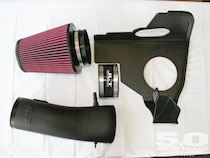 "The 2013 GT500 tunes really no different than previous '11-'12. However, Ford added some new features with AdvanceTrac and Launch Control combinations," explained Jon. "These new logics posed some power-limiting features that I worked through. Being able to datalog all available data management routines and parameter IDs was a huge help in defeating the new logics, and even modifying them to work with the additional power."

With Jon's knowledge of Copperhead logic, Evolution was able to quickly squeeze more power out of the stock 5.8, but when the parts left their boxes and joined the party, that's when the real magic happened. The results were impressive at the rollers and on the 1,320, but what you are about to read was achieved with a stock supercharger.

"It responds much like the '07-'12 Shelby GT500s," Fred added. "We have been using the Eaton TVS 2.3-liter supercharger for the past five years, so when it was confirmed to be the stock supercharger of choice for the '13 Shelby GT500, we already knew what combination to go with."

As we move to phase two, a 3.6-liter Kenne Bell Mammoth supercharger was already waiting in the wings as this story was written. Stay tuned as your favorite magazine documents a new legend. It's the one you'll be telling your grandkids about. When 9-second e.t.'s and 787 hp are the introduction, you know it's gonna be a good read. 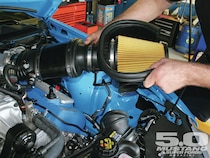 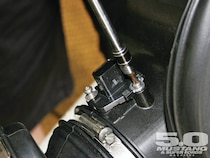 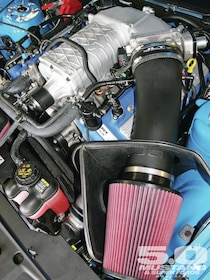 Nelson Whitlock wheeled the '13 GT500 to a 10.02 on its first outing, which was tantalizing. On the second outing, a headwind kept things in the low 10s. After a move up to 4.30 gears and some additional at-the-track tuning from Jon Lund, the team cracked into the mythical 9-second zone with a 9.95 at 142.36 mph.

Nelson launched the '13 at 6,000 rpm, and the Steeda suspension planted the rear tires with a 1.50-second short time. Using Barton's new GT500 shifter, he banged his way through the gears at 7,200 rpm. Yup, you read that right. The Evo '13 took the Over Rev feature to a whole new level to get things done.

"The Steeda suspension was an integral part of the car performing at the track with 1.40-1.50 60-foots all day long," Fred said. "We knew how to setup the S197 chassis. We just needed the best components and that's where Steeda came in. Steeda makes some of the best suspension parts in the industry, which actually perform as good as they look." 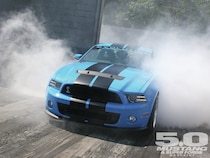 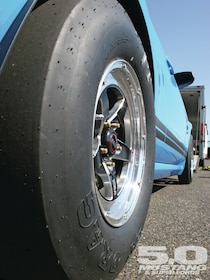 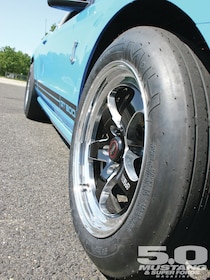 Like the factory tires, the factory suspension is not geared to putting down nearly 800 lb-ft at the dragstrip. To dial in the hook, Evo upgraded the '13 GT500 with a complete Steeda Hardcore suspension, including the control arms, Panhard bar, and antiroll bar. The resulting 1.40- to 1.50-second 60-foot times speak for the efficacy of the Steeda gear.

With just a handful of modifications topped with Jon Lund's custom tuning, the Trinity 5.8 approached 800 rwhp with the stock supercharger. As you can see, boost didn't increase much but the engine efficiency improved greatly. The final gains with the bolt-ons and fuel resulted in gains just shy of 200 hp and 200 lb-ft. How awesome is that?

After increasing the flow and boost on the front side of the engine, the '13 GT500 was forcing big power through the stock exhaust. To open things up, Evo chose ARH 1-7/8-inch long-tubes and a 3-inch X-shaped crossover ($1,600) to provide healthy power gains and especially generous extra grunt on the torque side.