After Hitting The Road And Several Dynos For Two Weeks Of '10 Gt500 Fun, Giving The Car Back Was Tough 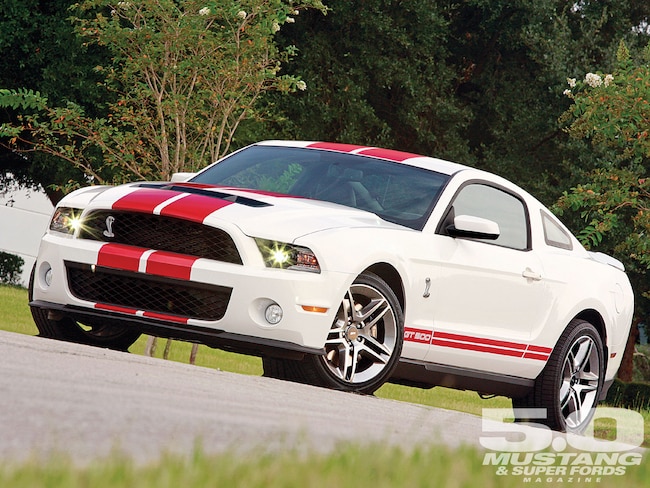 As you'll read elsewhere in this issue, we stepped up to sponsor Mustang Week this year. How we had never made it to this event before I'll never know, but once we signed on I was pretty stoked about packing the family up in a Mustang and making the trek up to Myrtle Beach, South Carolina. For a fleeting moment I considered taking Project Vapor Trail, but the idea of cramming my wife's monster suitcase and my son's boogie boards and such atop PVT's KDezines/Pioneer audio system made me pass over that option in a hurry. While taking the Fox 500 hatchback would have been great, that thought was just a fantasy back in July.

So the question became what to drive to a week-long Mustang event. I couldn't think of anything better than the latest GT500, so I managed to borrow a '10 GT500 fresh off the delivery truck from Michigan. Of course, you have to be careful what you wish for.

You know I've raved about just about everything but the rear fascia of the '10 GT500, and I'm the owner of the prior model, so this was tougher duty than it sounds. I'm an early adopter that loves the latest and greatest, but conversely, I can't imagine parting with the cars I already own. As such, being tempted by the latest Shelby was a test of will power.

Of course, part of the reason to drive the car was to do some more testing, but the first step was the aforementioned road trip. It was pretty clear from previous experience that the latest GT500 is a powerful car with much-improved handling and a touch of panache. What wasn't clear was just how capable this car is as an every day driver. Not only did I fill the trunk like the back of an SUV and embark on a 9-hour, 500-plus-mile trip, I didn't think twice about it.

Sure the car was spankin' new, but it was also a 540hp rocket. We've all become spoiled by the manners of today's high-performance monsters, but it wasn't too many years ago that taking such a trip in a 500hp car would only be for the brave. Not so anymore, but it's the incremental improvements that elevate the car as a more worthy driver than its predecessor.

Topping the streetablity charts in the latest version is the revised clutch. Where the prior Shelby clutch was grabby and in need of just the right rpm for smooth engagement, the latest clutch is forgettable effortless. Moreover, the sharper handling does give up a bit of ride plushness but after considerable time in the driver seat, the difference is really negligable. The more I drove the car, the more I wanted to drive one every day. Additionally, on a road trip like the Mustang Week journey, the new GPS and SYNC meant no frustrating wrong turns and no fighting with fading radio signals. I switched back and forth from SiriusXM to my iPod to keep on rockin' down the road.

Upon arriving at Mustang Week the white-with-red-stripe '10 was like a light to mosquitos. The Mustang fans adored it from far and near. I received so many "nice car" and "thumbs-up" comments I started feeling weird. I couldn't take the time to explain to everyone that it wasn't my car but I wished it were. Of course, it didn't hurt that there weren't too many other '10 GT500s on the road at that point.

While at Mustang Week, I thought I might have time to get a little testing done too, but I didn't realize the size of the event or how busy I'd be. If I had tried to tech the car for drag night, I wouldn't have any photos to bring back of the event. I was, however, goaded by our sales superstar Glen Castle to take the car out on the autocross.

I have to say that the car impressed just like it did in San Francisco earlier this year. On my tentative learn-the-course lap, I somehow managed to lay down the second quickest lap of the evening, a 0.29 and change. This speaks far more to the handling of the car and the smarts of the stability control (I was running in Sport mode) than it does for my driving. When I tried to push it on the lap that counted, I just slowed down, but the car acquits itself well on the street and track.

After a great week of driving the car, it was time to get back home and do a little testing with the car. I scheduled an appointment with Justin Starkey at VMP Tuning in Deltona, Florida, to strap the '10 GT500 down to his Dynojet to see what it would do in stock form. If you tune into our blogs at 50mustangandsuperfords.com, you already know the stock number. However, once it was there, we couldn't resist trying a few bolt-ons to see how much potential was locked up in the new car. It's safe to say these cars will be just as much fun as their predecessors, if not more fun.

So keep reading and you'll see we learned a few things, but if you are considering a new GT500, I think Matthew Broderick said it best in Ferris Bueller's Day Off: "It is so choice. If you have the means, I highly recommend picking one up."

On The Dyno
As expected, Ford engineers definitely sharpened the stock tuning in the latest GT500. Therefore Justin's first shot at tuning a '10 resulted in a quick 13.26 hp and 2.35 lb-ft gain. He then reinstalled the stock tune so we could see what his stock-look 2.65-inch pulley had to offer with stock tuning. The pulley offered a big jump of 18.02 hp and 35.84 lb-ft of torque versus the baseline number, and even bested the tune alone by 4.76 hp and 33.49 lb-ft. Of course, the true tale was told by the pulley and tune together, which bested the baseline by 44.74 hp and 44.37 lb-ft. Adding the VMP twin 67mm throttle body jumped power by 9.21 hp. Finally, swapping out the paper filter for an oiled-gauze unit showed a 2.09hp gain using the truncated raw data we're displaying here.

It's important to note that the graph measures more data points, so you can always see larger numbers, both peak and through the curve, when scrolling the cursor in the Dynojet software, but those numbers might not fall on an even 500-rpm increment. We try to show the raw numbers and the graph when possible to give you a more illustrative view of the testing and show how the gains or losses fall within the power band. You can check out a more expansive chart of raw numbers, as well as some video clips, on our website if you really want to geek-out on the data.

In the end, you can see we picked up nearly 60 hp and 60 lb-ft of torque at the tire with a pulley, tune, and air filter. Not too shabby for a day when the temps in the dyno room started in the mid-90s and were above 100 by the time we wrapped up testing on a July afternoon in Florida.

Racing Dynos
Two days after wrapping up our testing over at VMP Tuning, I decided to run the car over to the local Mustang dyno shop in my town, MooreTuned in Lakeland, Florida. I wanted to see how the Mustang dyno compared to a Dynojet for future reference, as the Mustang dyno loads the vehicle based on its weight and aerodynamics. By now we all know that different brands of dynos often read different results as they measure the car's output differently. Since Dynojet's and Mustang's are what we most often use to test, I thought a stock GT500 would be a good test to compare the two.

Alan Moore of MooreTuned made quick work of strapping the car down, and after a 15-minute drive and dyno pull, its temperature was definitely stabilized. The weather was the typical of a July morning, muggy, but the highs and lows were about 3 degrees cooler than our test day at VMP.

Our best number was 408 hp and 418 lb-ft of torque at the wheels. That was 70 hp and 51.42 lb-ft lower than we saw on the VMP Tuning Dynojet. That's a pretty big disparity, and seems to back up our previous experience with comparing the two dynos-the higher the output of the car, the bigger the difference between the two.

Of course, pure research wasn't the only reason to head over to MooreTuned [(863) 559-4344; www.mooretuned.com]. Mustang dynos are made to hang onto power so you can do a pretty accurate quarter-mile simulation. Besides being informative, it's fun to drop the hammer on a street-tire car, hear just a little chirp, and then power-shift all the gears without ever worrying about traction.

I made two quarter-mile hits, launching the car at 5,000 rpm and powershifting each time. My first was an 11.97 at 113.63 with a 1.49-second 60-foot time. With warmer tires and more aggressive shifting, I bettered that run with an 11.52 at 114.46 mph and a 1.34-second 60-foot! Odds are I will never be able to replicate those numbers on a dragstrip, but more gifted drivers have run similar numbers at the strip, so I'd say these are pretty representative of what a '10 GT500 can do at the strip with a slick and an experienced driver.

As luck would have it, my afternoon trip in the '10 GT500 took me to the media day for the newly christened Brothers Performance Warehouse [(800) 486-2681; www.brothersperformance.com] in Deland, Florida. While there, the Brothers crew wanted to borrow the car for a little dyno video, so we were able to obtain some same-day, different dyno testing.

So I'm not a scientist and it was definitely cooler in the morning than the late afternoon at Brothers, but the Dynojet results were pretty repeatable. At Brothers the GT500 laid down 475.38 hp and 456.54 lb-ft of torque-only 2.62 hp and 13.89 lb-ft less than it did at VMP. That put the same-day difference between the Brother Dynojet and the Mooretuned Mustang at 68 hp and 58 lb-ft, or a ballpark difference of 14 percent. Again, it's not pure science, but it gives you an idea of how an inertia dyno (Dynojet) and a loaded dyno (Mustang) differ. Your mileage, as they say, may vary.

While we're on the subject of dynos, it's worth noting that VMP's Dynojet is a loaded model. Main main Justin Starkey has software programmed with custom load curves to simulate vehicle weight and aerodynamics.

"I've been using it more and more, since it doesn't bog the vehicle down at low rpm like putting on a flat 10- or 20-percent load. I don't know if I was using it at the time, it really helps to load a vehicle when you are tuning it so the pull lasts longer and you get more data points."

Justin says this type of loading is only necessary for tuning up cars with big power and lots of gear, so it wasn't required for our stock '10 GT500.