It Has The Same Chassis Underneath, But The '10 Mustang-Especially With The Track Pack Option-Feels Like A Whole New Car 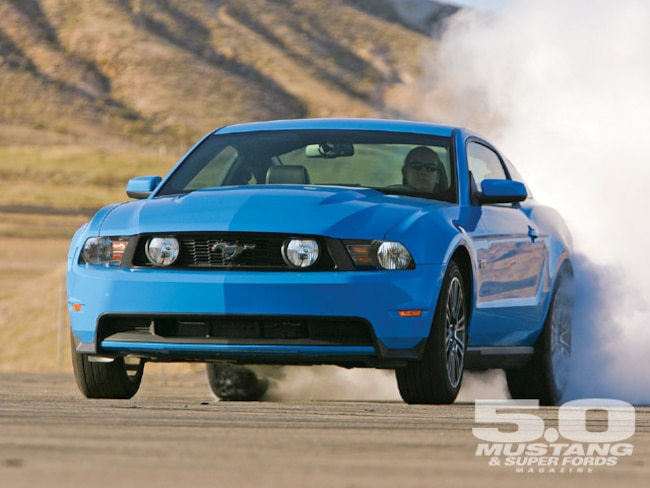 Horse Sense: Believe it or not, Ford engineers and designers had no internal codename for the '10 Mustang. The engineers just call it an S197 and the designers just call it the 2010. I pestered all of them looking for even a nickname, and they all looked at me like I was crazy. Of course, we hardcore Melvins need to call these cars by their codenames. It's an easy way to separate the generations. Since there isn't a name for these cars, I'm gonna throw one out there and see if it sticks. Since the first press releases remarked about the shark-nosed styling and it's the '10 Mustang, I like SN10 as the unofficial codename. Let me know what you think.

Back in our March issue we told you everything you wanted to know about the '10 Mustang save for one vital tidbit-what it's like to drive it! That's not such a small detail, but it would be pretty easy to surmise that the latest Mustang feels a lot like the last one. They do share the same powertrain and chassis, so how different can they be? As it turns out, the '10 is actually much better than the current Mustang GT in many ways, not the least of which is how the car handles, but I'm getting ahead of myself.

In the span of a few weeks, I took a sneak peek at the '10 Mustang in Ford's design studio; attended the car's big reveal event in Santa Monica, California; then found myself learning more about the car's underpinnings before embarking on a road trip that would eventually put me behind the wheel of the eagerly anticipated next-gen Mustang. Before I took the reins of the new Pony, Ford let us start off by driving '09 Mustangs. When a manufacturer lets you drive the previous car-or even better, a competitive car-before you drive its new ride, you know confidence levels are high.

Rolling on 19s, the '10 Mustang looks sleek on the road, and it it's a blast to drive thanks to its sharp handling, Bullitt-level horsepower, and much-improved cockpit. Don't pick the Grabber Blue unless you really covet attention, however.

Though I have plenty of S197 experience, not the least of which comes from my heavily modified GT500, it's always nice to refresh your memory right before you drive the new car. Our baseline cars were a pack of well-worn S197s, so I had to keep reminding myself how much better this car had been than its predecessor. These had picked up a few squeaks and rattles, and a bone-stock S197 interior has always been the weakest point of the car. Still, I've grown to appreciate these cars for the mark they have made in Mustang history. Following up this car is like being the third singer in Van Halen. It's a tough gig to pull off.

As I pulled into a waterfront lot rowed with '10 'Stangs, I knew the car had already started growing on me. Seeing the cars side by side accentuates how much the current car differs from its more modern brethren. As you know from our prior story, this re-skin is aggressive. The only sheetmetal that remains consistent between the two cars is the roof. However, it's not until you see the cars next to one another that these differences become more apparent.

Whether or not you care for the new girl's looks, there's only one way to determine if you like her personality, and that's to spend some time with her. So I quickly gravitated to a Grabber Blue GT and hit the road on a path through some of Southern California's finest twisty roads, providing a scenic route to Willow Springs Raceway. Immediately the car feels tight-much tighter than your standard-fare Mustang GT-but not the least bit harsh. Moreover, the car is quieter. It's hard to believe that all the talk about stiffening and dampening to make this car quieter wasn't just talk.

You might have seen a video of me ripping up the rear tires on this '10, as some of those Internet types that are used to downloading everything for free co-opted our photo shoot. With 315 hp, 325 lb-ft, and 3.73s on board, smoking the Pirellis is no problem, provided you turn of the traction control and give her some rpm. We haven't had a chance to drag test the '10 yet, but given its Bullitt breeding, I'd say similar mid -12-second performances are realistic.

Of course, while beating on the '10, I was on the other end of that Sound Induction Hose that lifts the engineer's NVH velvet rope to allow a hint of induction noise to enter the cockpit. I have to hand it to the protractor crowd for realizing that Mustang guys want to hear the engine, but in practice, this thing looks silly in the engine compartment and sounds a bit like a vacuum leak from the driver's seat. Maybe version 2.0 will knock off my Pilotis...

At night the '10 Mustang's new LED sequential taillights provide an instantly identifiable visage for your opponents to get used to seeing. Even this angle has grown on me, and it will be interesting to see what the aftermarket has in store for the back of these cars. In fact, our pre-production tester was actually damaged in transit and outfit with a more aggressive lower valance from Ford Accessories.

About halfway through the trek, I was able to swap cars and score another Grabber GT setup with the optional 3.73 gears. Ah, such a reliable modification. It definitely perked up the car's responsiveness, and today's electronic throttle control has come a long way since '05. Disengaging the traction control and dropping the hammer resulted in plenty of spin, followed by adequate thrust. The stock shifter is pretty good these days as it was-like much of the gear on the new car-benchmarked off our old favorite, the Bullitt.

As much as I dig the new interior, the stylish new seats in the latest car are not quite as comfortable as the prior-model seats. It might just be that I'd spent a few hours on a plane before wheeling the '10, but the seats seemed a bit flat and firm. Your mileage may vary, but I'm anxious to drive one again without the coach-seat warm-up.

The twisty street drive was a mere appetizer for the following day's romp around the Streets of Willow at Willow Springs Raceway. This small, tight course really works the car's handling without letting you get up to brake-melting triple-digit speeds too often. Amazingly sure-footed, the '10 GT's secret weapon-its spankin' new Electronic Stability Control, which offers On, Sport, and Off modes. With the ESP in full On mode, the '10 fools you into believing you are an excellent driver; moving it to full Off reveals that you really aren't as good as you think you are. My favorite setting is the Sport mode, which gives you enough rope to allow some fun antics, but reels you in before you get into trouble.

Here's a full look at the new Cold Air Induction system on the '10 Mustangs. Ford engineers were confident enough in its design to challenge the aftermarket to beat it. I can't wait to see that battle to unfold. The Three-Valve sports Bullitt-level 315 horsepower, and if you select 19-inch wheels or order the Track Pack, you get the new strut-tower brace to reduce chassis flex.

After learning the lay of the track in the base GT, I made the move into the Track Pack-equipped GT, which gets 3.73s, carbon-fiber diff plates, GT500-spec sway bars, stiffer rear springs, specially tuned dampers, Bullitt-spec brake pads, GT500-spec lower control arms, 19-inch wheels, and Pirelli Pzero 255/40-19 summer rubber. All I can say is wow. This is like a stock Mustang that's received an aftermarket suspension upgrade. I'm sure there's still room for improvement, but the Track Pack is a really aggressive handling upgrade right off the showroom floor. Couple those upgrades with the ESP, and this car is going to be fun at the first track day you can find.

Speaking of traction, I followed up my laps on the Streets by digging in for our burnout cover shot. Keeping the car still and wasting the rear tires is fun, but the '10 needed a lot for rpm to keep from wheelhopping like a jackrabbit, so the drag racers are going to want upgraded lower control arms.

In the end, the more time I spent in the '10 Mustang, the more I liked it. The saggy but angular rearend still bothers me, but from inside the cabin, it's one of the best Mustangs yet. As a gadget freak, I simply adore the new Sync system, especially with the nav, and the more integrated MyColor and Ambient Lighting is slick. Combine those features with all the new interior upgrades, and your time in traffic will be a lot more fun.

2010 Shelby GT500
If there's one thing that accelerates my acceptance of a new Mustang body style, it's the variant from the Special Vehicle Team, and the '10 GT500 continues that tradition. It seems to share more with its predecessor than the GT, and for me, that's a big plus. Sure the Shelby offers a number of new styling cues, but the round foglights, aggressive splitter, massive hood vents, and Gurney-flapped rear wing all take the base '10 styling in a positive direction.

Of course, it doesn't hurt that like the GT, the GT500 was benchmarked off my prior favorite variant, the '08-'09 KR, in both handling and power. Driving this one hasn't happened yet, but I'm eagerly anticipating it. If it's as good as PR'd, it should be a dandy, so stay tuned for our drive report. I hope it's sooner than later.