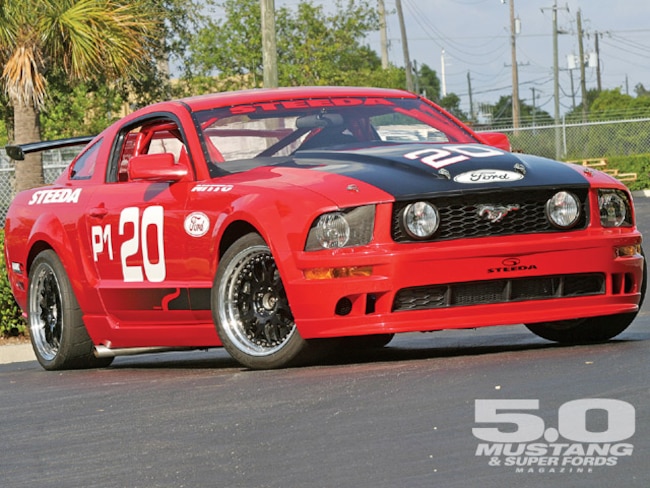 Horse Sense:
AiM Sports' MXL digital dash and gauges as found in Steeda's new Q650R includes a harness to connect to 12V power and a variety of ECUs such as a MoTec, AEM, Autronic, Bosch, Racetech, EFI, and more. Obviously, Steeda uses AiM's CAN serial interface to connect the MXL to the factory ECU. Not only does the MXL keep tabs on mechanical happenings, but it also records lap times.

Steeda Autosports has both of these bases covered. Not only does Steeda send out its own components for us to test, but the company has Mustangs, such as its new Q650R, to wring out its products on the racetrack. The truth is, Steeda gets more feedback testing them on this car compared to bolting them onto Editor Turner's GT500, but we digress.

On the outside, the new Q650R doesn't really scream race car with its mostly stock exterior. We've seen bigger wings on grocery carts, but this one's definitely functional. Every Mustang fan is jealous of the Q650R's rolling stock as we'd all like to roll on Forgeline wheels wrapped in Nitto NT01 treads. Steeda's own brakes hide inside the Forgelines to slow the madness before the turns. The body upgrades are limited to a Steeda front splitter, race wing, a cowl hood, and painted side mirrors. Don't forget the neighborhood-alarm side-exit exhaust, either.

Getting the most out of developing new performance components is exactly what this new Q650R is all about. Its sole role in life is to get shredded at a variety of racetracks testing Steeda's suspension, tuning, and engine upgrades-all of this to make sure your next Steeda Mustang is at the top of its game. How nice is that?

This new Q650R is a departure from previous No. 20 cars for a couple reasons. First, the prior 20 cars were raced in a sanctioned series against other cars. The drivers of past 20 cars include Boris Said, Charles Espenlaub, Steeda President Dario Orlando, and Steeda Vice President of Operations Glen Vitale. Second, the number "20" on this new Q650R pays tribute to the 20 years Steeda's been in business. Obviously, the previous Steeda race cars wearing the number 20 on the door didn't coincide with 20 years in business, so this time around it's serendipity.

The Q650R was built by Steeda's Skunk Works Team, headed by Chief Technician Steve Chicisola, a Steeda fixture since the beginning. After all, part of the Steeda name came from him. According to the company, the Q650R is Steeda's "testbed for continuing refinement and development of our track-tested and race-proven performance parts and accessories." Speaking of which, the Q650R boasts Steeda's new Watt's link, along with a full coilover suspension using Tokico D-Spec shocks and struts. Steeda basically threw its catalog at the car when fitting it with a worthy suspension. Of course, Nitto treads are in the Steeda catalog as well, so the Q650R wears Forgeline 18-inch wheels at each corner, wrapped in NT01 shoes.

Another facet of the Q650R coming in handy in the Florida heat is the car's Adaptive Performance calibration. Combine the Florida heat with the Whipple supercharger, and you have a combination perfectly suited for the software's on-the-fly recalibration. This "live" tuning medium adapts to race conditions to make sure every ounce of available horsepower is being delivered to the pavement. "This adaptive system will always optimize the engine's power output so that the maximum amount of power is always available, no matter how severe the race conditions may become," according to the company.

One thing we know everyone likes is every possible horsepower getting to the rear tires. We could adapt to that. 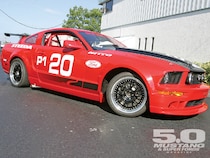 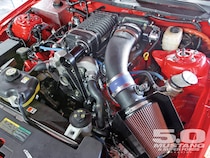 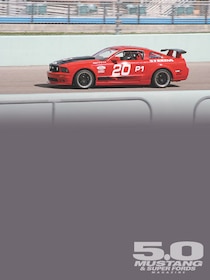 The inside of the Q650R is all business; You won't find any fluff here. Since the car started out as a body-in-white, the car didn't have the interior anyway, but even so, the only thing close to being street-friendly is the Cobra bucket seat, which is downright plush. A custom rollcage keeps driver safety in mind at all times and all speeds. As you can see, the only factory component screaming out to us is the headlight switch on the left side of the dash. The Q650R utilizes an AiM Sports MXL digital dash to keep tabs on mechanical goings-on (see Horse Sense).