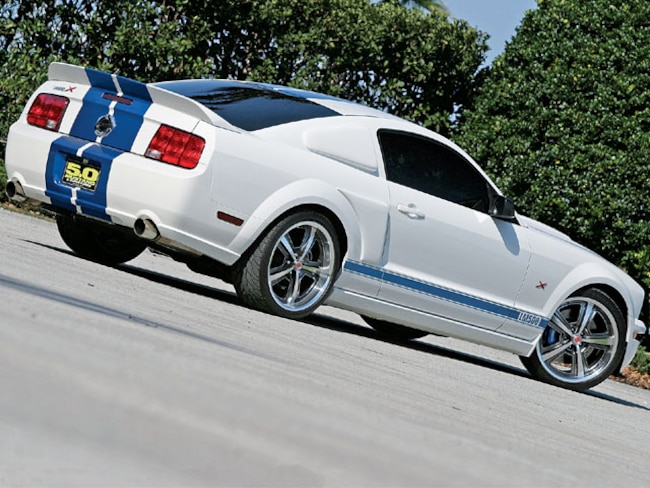 After fighting traffic on my way home in the Legend X Mustang, a traffic jam the following morning encouraged me to take the backroads to the office. Two-lane backroads are fun, and I got the chance to exert some of the 600 or so horsepower offered by the X's Kenne Bell-blown Livernois 5.0-liter Three-Valve; then I came upon my turn. I rounded the corner, slowed to a crawl, and hammered the throttle. The BFG KDWs clawed hopelessly at the asphalt as the tach climbed. I banged Second gear, and the KDWs decided to retract their claws and let the car drift sideways. That was enough to calm me down for the rest of the commute. I knew the Legend X was fast, but I had just experienced its raw street-brawler personality.

The Legend X separates itself from the pack with a unique body package. It builds off of a GT 500 fascia and adds a host of Legend-exclusive body parts, resulting in a cool, modern/retro look. Of course, those Shelby CS69 wheels make the whole package for us.

What is a Legend X, you might ask. It's one of the latest ultra-performance tuner cars to join the S197 fray-and a crowded fray it is, from Ford's own Shelby line to the old guard of Saleen and Roush. There's something about the car's retro styling that brings out the kid in a lot of us, including John Temple of Temple Performance Cars. John says he wanted a high-performance car for the masses that stands out. To that end, he fused '60s-Shelby influences with the modern equivalent and rounded it out with a generous dose of modern performance.

In this case, it's modern performance with a retro feel. The Legend X growls through a full Bassani Xhaust system that offers a familiar low roar until the throttle is opened and the roar swells. The exhaust, coupled with the S197's naturally quiet cabin, quells the sound of the Kenne Bell blower atop the Livernois Three-Valve 5.0 liter underhood, but forget it's there. Simply cracking the throttle results in an instant 10 pounds of boost that swells all the way to redline if you dare keep your foot on it. Coupled with snappy 4.10 gears and the close-ratio T56 six-speed, the boosted 5.0 is a thrill a shift. We adapted to the muscular, grippy clutch needed to corral more than 600 hp.

Unlike many of the vinyl-striped Mustangs on the road, the Legend X sports painted-on stripes, which really take the car's looks up-market.

The only downside of all this power is a pronounced stumble in the 2,500- to 3,500-rpm range. Given that our ride was a prototype, Steve will undoubtedly weed out any such gremlins before a Legend X lands in the hands of happy new owners. Likewise, he'll have to banish the tire-pressure-sensor warning chime triggered by the transplanted GT 500 dash cluster. The dash looks great, but if we didn't have the Shaker 500 cranked most of the time, that chime would grate a bit.

Besides the power, what truly shined about the Legend X was its head-turning looks. The car was simultaneously familiar and unique, and it stood out from other Mustangs without being garish. I collected my fair share of turned heads, thumbs-up, and verbal compliments during my brief time behind the wheel. Much of that is due to Steve's in-house body panels-hood, rear wing, splitter, side scoops, and quarter-window scoops-as well as the painted-on Le Mans stripes. The stripes are a real upgrade over vinyl, and the cherries on the Legend X sundae are those sweet CS69 wheels.

So, if you're looking for something different but still want prebuilt power that can rule your local streets, write your own legend with Steve Temple. 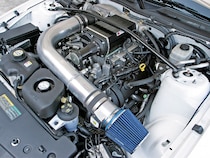 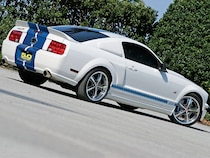 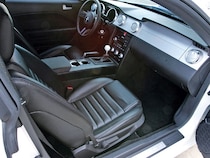 We also spent a couple days wheeling the Legend X's little brother-the LM500 Series 1. Featuring a stock 4.6 engine augmented with a RoushCharger supercharger, the LM500's bodywork and Shelby CS67 wheels take you back in time, while the smooth, robust power puts you back in the seat. Interestingly, the LM500 forgoes mufflers for more power and growl, but that doesn't keep you from retaining a full warranty with the Roush blower (a more aggressive 500hp ProCharged version is also available). Similar to its big brother, it features billet interior bits, extra gauges, and most importantly, painted-on stripes. An LM500 Series 1 will set you back $23,000 on top of a customer-supplied S197.

Being curious sorts, it was only natural that we strap the Legend Mustangs to our in-house Mustang chassis dynamometer to see what they crank out. We dyno'd the Legend X car first-we had to see what that monster made. It topped out with 502 hp and 549 lb-ft of torque at the rear wheels on the dyno graph. Our 200-rpm increments in the chart don't show those highlights, but they were there.

Steve Temple was quick to tell us the car cranks out 668 on a Dynojet, which we don't have a hard time believing. The Mustang dyno loads the vehicle for weight and aerodynamics. Either way, the Legend X currently holds the title for the most powerful Mustang we've tested on our in-house dyno. (To learn more about how dynos differ, check out www.mustang50magazine.com/techarticles/m5lp_0204_chassis_dynamometers/index.html.)

Knowing it would be a tough act to follow, we had to see how the more affordable, lower-boost Series 1 car stacked up. Its stock long-block and conservatively pullied Roush blower weren't going to throw down the world-beating power of the Legend X's screw-boosted 5.0-liter, but it did have rear-wheel peaks of 381 hp and 351 lb-ft of torque.

Sadly, our short experience with the cars didn't allow track testing, but we're guessing we would've had fits getting the Legend X to hook up on street tires. We think the Series 1 would run about like the Roush Stage 3 we tested last year since the Series 1 feels a lot like that car.