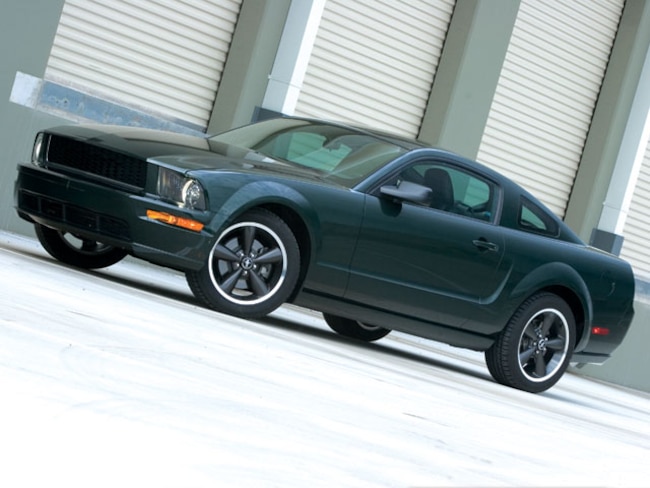 Steve Turner Former Editor, 5.0 Mustang & Super Fords
February 17, 2008
Other than the foglight-free black grille, there's not much to let people know the Bullitt is more than a Mustang GT, and that's part of the reason we like it so much. It's a stone-cold sleeper.

Horse Sense: If you follow our Real Street class in the NMRA, you know Tim Matherly races an '01 Bullitt. According to the International Mustang Bullitt Owners Club, it wasn't a production car, but Tim's ride was a Bullitt in White (like a body in white) sold to him to be converted into a race car. We'd say that worked out for the best, as Tim has just racked up another Real Street championship.

It's rare that a sequel surpasses a great original. I know, I know, there's Empire Strikes Back, but it's still fairly rare. It's probably more common that a remake of an old movie has a chance to be better than the original. In the case of the Bullitt Mustang, the original was a remake, or reimagining, of the '68 Mustang in Steve McQueen's classic movie. The '01 took a few styling hints from the movie Mustang, added some aluminum bling, power, and a suspension tuned for a high-speed chase. It was a big hit with us and with buyers that lovingly refer to themselves as Bullittheads.

When word began to leak out that Ford was considering another Bullitt Mustang, it made a lot of sense. The S197 shares a much greater connection with the vintage Mustang. However, the original Bullitt was such a hit in its time, a new model would have a lot to live up to. Moreover, the marketplace is now crowded with all manner of specialty Mustang offerings. From a horde of aftermarket choices to Ford-sanctioned options such as the Shelby GT, I wondered how a Bullitt might find its own niche.

Likewise, we really dig the wingless trunklid. The car is clean and a practical antonym to its flashy Shelby GT cousin. Sadly, Ford just can't seem to get those Sirius antennae any smaller. I'm a fan of SatRad, but I don't understand why the aftermarket antennas are so small and the Ford units are like a hunchback. The Bullitt name on the faux gas cap is the only indication of this car's special nature.

As it turns out, taking the car's performance level up while keeping its appearance undercover really sets this car apart from the crowd. Hopping behind the wheel, I immediately noticed all the shiny bits. I fired the car up and it was really quiet, even with a modified H-pipe and larger exhaust tips on board. The clutch is light, and right away I fell in love with the shifter. It's smooth and quiet, and it doesn't have the wet-noodle feel of the standard S197 shifter. Coupled with the revvy, FRPP-tuned Three-Valve, it was a joy to blast through the gears. I'd love more power, but this car is really well-balanced.

Likewise, the Bullitt's handling is light and controllable. The original model was stiffly sprung by factory standards, but this Bullitt is almost SVT-like in its handling. Body roll is apparent, but then the car squats and goes where it's told. It's what we'd call tossable, and that trait came in handy when I got cut off by a Jaguar on Interstate 4. I had to truly test the Bullitt-spec Performance Fricition brake pads while turning to avoid the rear of the Jag taking out the front of the Bullitt. With sudden application of the brakes and input to the steering, it maintained control and avoided disaster. And that's just what Ford did with this sequel. It could've paled in comparison to the original, but instead it improves on the concept by toning down the appearance and focusing on the driving dynamics. 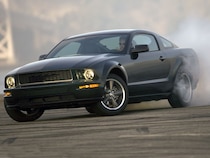 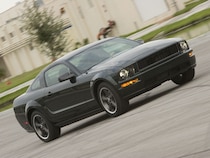 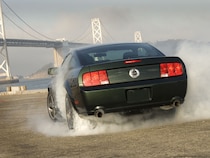 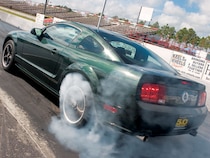 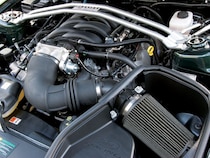 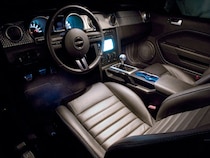 We couldn't wait to get the '08 Bullitt to the dragstrip to see what its combination of Ford Racing induction, tuning, and 3.73 gears would deliver on the quarter-mile. As such, we headed to Bradenton Motorsport Park (www.bradentonmotorsports.com), home of the NMRA Spring Break Nationals, to drop the hammer. While it's always a lot of fun to see how quick a car will run on its stock street tires, it does require experimentation. Finding just the right combination of launch rpm and clutch disengagement to get the car to hook without bogging is what the doctor ordered. Usually, street-tired cars present the problem of trying to launch at a low enough rpm, but the Bullitt went against the grain.

Sure, there were some big-tire cars laying down rubber before we ran, but the all-season BFG KDWS flat-out hooked. Associated Editor Johnson and I took turns blasting the Bullitt down the track. Johnson fancies himself a hot shoe, so I let him run after me on all but one run, so he had the disadvantage of a hot engine. We started out launching the car around 2,000 rpm and shifting it at 6,000, but we quickly raised the launch rpm and shift points as the day went on. After hovering around the 13.70-13.80 range for most of the day with the best 60-foots in the low 2.0s , I didn't really think there was much left on the table. We iced the throttle body during our 45 minute cool-downs between laps, but time was running out, and the truck was coming to take the Bullitt back to Ford. We had time for one last set of runs.

After cooking the KDWS, I staged and revved the car up to 5,000 rpm and quickly released the clutch. The tires squealed while clawing for traction. They spun for about three revolutions, but the car was moving forward. I thought I'd killed the 60-foot and wasted the run, but I angrily power-shifted through Second and Third. The happy combination of 3.73 gears and the Bullitt's extended 6,500 rpm rev limiter meant an e.t.-killing shift into Fourth wasn't necessary. Everything felt good but the launch. As I rounded the corner, Johnson gave me his best down-and-out look and asked me how it felt. Then he handed me the timeslip. Our ninth run of the day yielded a 13.48 at 101.79 mph! I was shocked and pleased. The car liked spin and still yielded a 1.99 short time. Given the 90-degree temps on our late-October test day, we were happy with the results. Of course Johnson tried to beat the number and ended up missing second.

While we all know the Three-Valve engine is more powerful than the Two-Valve engine, it was interesting to see the '08 Bullitt's promised 312 crank horsepower stack up against the '01 Bullitt's 265 crank horsepower. Fortunately, International Mustang Bullitt Owners Club (www.imboc.com) member Brad Kramer was willing to let us borrow his low-mileage '01 for our testing pleasure.

After driving both cars for an hour to Modular Madness (www.modularmadness.com) in Sarasota, Florida, we let the cars cool for an hour or so while we had lunch. Brad's '01 hit the rollers first. Interestingly its aluminum intake was still fairly warm, while the '08 Bullitt's composite intake had already cooled. We pulled Brad's Bullitt twice and the results were consistent, with the best peak number clocking in at 230.48. The car was stone stock save for a set of Steeda underdrive pulleys.

We followed up with the '08 and it was getting ticks better with each pull as the aluminum block warmed. We ran it three times, and its best peak was 265.11. Using the common 15 percent drivetrain loss calculation, that puts the '01 at 271 at the crank and the '08 at 312 crank horsepower. It sounds about right to us. More interesting is the '01 Two-Valve's bottom-end superiority until about 3,900 rpm. These modern Three-Valve engines are a lot like the old naturally aspirated Cobra Four-Valves, as they obviously pull a lot farther and stronger than the Two-Valves.