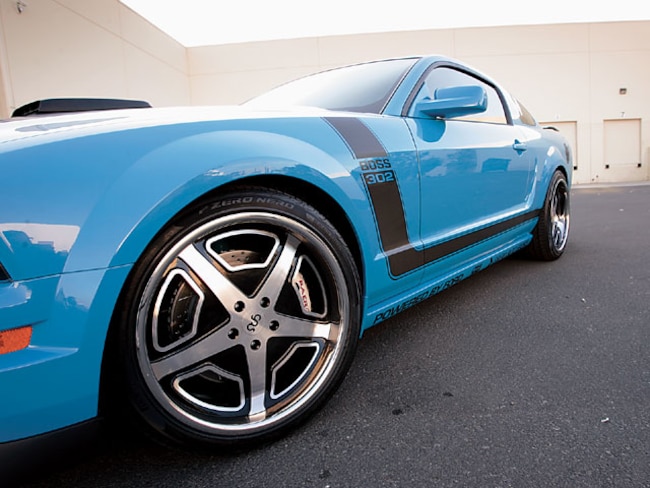 Horse Sense: Our pals at Galpin Auto Sports scored us a photo session with the '07 Boss 302, with barely two hours of time-and daylight-to spare before the 'Stang had to be loaded up and transported to Las Vegas for the SEMA show. Yes, "being connected" does have its advantages. Many thanks are in order for Steve Carpenter, our go-to guy at GAS, for granting us exclusive access to the car, despite the project's eleventh-hour urgency. Read on and enjoy!

It's been nearly 38 years since Ford introduced the '70 Boss 302 Mustang and fired a salvo, scoring a direct hit on one of Brand X's most popular offerings of the time, the '69 Camaro Z/28. You see, back in the late '60s and early '70s, showdowns between the ponycars of the Big Three automakers didn't only happen on the dragstrip. The feuds were just as intense on the road courses of Trans-Am racing, where it wasn't uncommon to find 'Stangs, Camaros, and 'Cudas duking it out for win-on-Sunday, sell-on-Monday supremacy.

Although the Camaro held a lock on Trans-Am championships during 1969, 1970 marked the end of the Bow Tie era in the popular SCCA series. Parnelli Jones, driving Ford's refined world-beater, the Boss 302 Mustang, captured the title convincingly that year with five victories and several high finishes.

Today, the street version of the '70 Boss 302 'Stang is somewhat of a holy grail. The car, featuring Larry Shinoda's no-nonsense graphics package-a layout of black stripes across the hood, fenders, lower doors, lower rear quarter-panels, and the Boss 302 name in black vinyl-was, for all intents and purposes, a street-legal race car. It featured road-hugging handling, a four-speed Top Loader transmission, and the fabled Boss 302 engine-a super-stout short-block that was topped off with a pair of big-port, canted-valve cylinder heads from Ford's 351 Cleveland engine.

Ironically, Ford had to downplay this high-revving engine's true might-approximately 350 flywheel horsepower-and list its power output as 290 ponies. High insurance rates imposed on 300-plus-horsepower musclecars prompted this white lie back in the day. It's interesting to see how that dark period has transformed to light, and how Ford now proudly boasts about the horsepower and perfor-mance of the engines powering modern-day 'Stangs.

One of the new-era 'Stangs Ford proudly boasts about is this '07 Boss 302 Mustang, which debuted at the '06 SEMA show in Las Vegas. In our opinion, this Boss, built by Christopher Whitney, the shop foreman at Galpin Auto Sports (www.galpinautosports.com) in Van Nuys, California, is one of the most radical and coolest variants of S197's retro-mod theme we've seen thus far, as it seamlessly encompasses both the old-school Boss 302 flavor and new-age Mustang technology.

In a mere 30 days, Galpin Auto Sports' shop foreman Chris Whitney resurrected a legend with what we think is one of the finest unions of old and new we've seen in a long time. It's scary to think what kind of monster this would be if Chris had a year to build it.

You might be wondering how in the world a car such as this came to be. It all started with Beau Boeckman, president of Galpin Motors' new, state-of-the-art, car-customizing facility. The facility is known as "GAS" throughout Southern California and beyond, thanks to hip-hop artist Xzibit, host of the MTV program Pimp My Ride. The show is filmed in the rear shop at GAS. Beau contacted Ford about producing a car for SEMA as a way of showcasing the company's products and services being offered to the dealerships' new Mustang buyers and other enthusiasts.

"Originally, they had planned on modifying a Shelby GT 500," says Ford Racing's Jesse Kershaw. "But since we were already showing three different Shelbys in red, white, and blue at the show, adding another did not make much sense. We elected instead to tie Galpin's car in with our theme of American Muscle by having them create a retro-mod 'Stang that has all of S197's amenities and safety features-and the distinctive growl of classic musclecar horsepower." 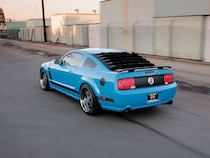 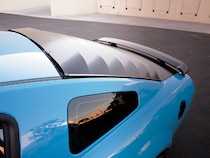 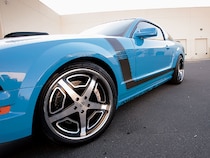 Shades of the '70s and plenty of today's high tech dominate the 'Stang's interior. The cockpit now sports a custom, black basketweave design with Grabber Blue stitching on the front seats, a GAS bolt-in, four-point rollbar, and a sweet throwback wood steering wheel from Grant. A Hurst T-handle shifter makes finding gears in the Tremec TKO 600 tranny a snap. The audio team at GAS outfitted the Boss 302 with DVD navigation and audio components from Pioneer, MTX, Q-Logic, and Streetwires. The dash is even signed by Parnelli Jones-the wheelman of the school-bus yellow Boss 302 that dominated the '70 SCCA Trans-Am series.

With that concept in mind and only 30 days to make this vision a reality, Chris, along with GAS master fabricator Jim "Cooch" Coutchure, went about transforming a showroom-stock, 4.6-powered 'Stang into the bad-to-the-bone Boss clone you see here.

But don't be fooled. There's plenty more to this 'Stang than just vintage stripes and a hot powerplant. Chris was able to take the "technology" of the '70 version and make it look at home in this '07. The engine features FRPP's new Boss 302 block, but it also includes original Boss flavor in the form of a '70 Boss 302 Holley carburetor, throttle cable and pedal, an OG Hurst T-handle shifter, and an original Boss 302 spoiler on the rear decklid. Where did he find this stuff? "I looked around on the Internet quite a bit, and I also found parts through Mustangs, Etc. of Van Nuys. The functional Boss 302 Shaker hoodscoop from FordRamAir.com isn't original, but it's the closest thing to an OEM piece I've seen."

The project wasn't solely a matter of adapting the old to new. Chris also battled the challenge of getting several S197 systems to work harmoniously with a pushrod engine that was never intended to sit under an '07 hood. Several factory Ford brackets, hoses, mounts, and more from the '01 Explorer were modified when necessary and installed in the car, thus retaining serpentine belt-driven accessories, including fully functional OEM power steering, alternator, and cold A/C. All the necessary stock wiring was retained throughout the car-power windows, locks, horn, wipers, gauges, lights, and so on are all operational-and PCM was also formatted so the factory fuel pump supplies the Holley with its proper fuel requirement.

The original Boss 302 Mustang was heralded as one of the greatest 'Stangs of all time, thanks to its cool look and high-rpm performance brawn that made it a tough customer on both the street and the road course during its heyday.

Galpin Auto Sports has reignited the hype of yesteryear with its '07 Boss 302 Mustang. This bad boy is a musclecar of another level, highlighted by new-school technology and a classic touch, truly setting it apart from any other S197 we've seen. Now if we could only buy a new Boss 302 with pushrod power on a dealer lot. That's the kind of Boss we'd like to have back.

The real showstopper is that this Mustang is motivated by FRPP's all-new, Boss 302 crate engine (PN M-6007-Z302Z), not a Three-Valve 4.6. That's right, pushrod power just like the old days, and this baby is founded on the Boss block we told you about in our Jan. '07 issue ("It's Good To Be Boss," p. 104). Note the super-sano detail of the engine compartment and the fact that the hoses, lines, serpentine belt, assorted fluid reservoirs, accessories, and power-steering hardware remain in their factory location. Down below, several hours were invested in making mounts and a crossmember for the Boss 302 engine and Tremec TKO 600 transmission. An 11-inch McLeod clutch and custom one-piece aluminum driveshaft link the motor with the 4.56-geared and 8.8 rearend.

This air-grabbing Boss 302 Shaker hoodscoop comes from FordRamAir.com of Saint Albans, New York. Chris and Jim "Cooch" Coutchure are the guys responsible for all the custom fabrication and modifying this project required, including making an air pan for the scoop, long-tube stainless-steel-stepped headers, and applying a circa-1970 throttle cable and pedal assembly to the drive-by-wire 'Stang. The distributor is MSD's Digital E-Curve pro-billet piece (PN 8530). This trick dizzy features a digital control module, allowing Chris to advance timing by turning two dials, and he can also set an rpm limit to protect the new Boss 302 from damage caused by a missed shift or driveline failure. The distributor contains a high-output ignition module, which eliminates any need for an external Digital 6 or other ignition box. Another cool custom component on this engine (not shown) is the crankshaft pulley. Chris and Cooch were able to install an FRPP SFI balancer and retain full use of the '07 'Stang's factory crankshaft pulley. It's one thing to simply put parts on a car such as this, but making them look as if they belong there, as these guys did, is an art.