With Four Hours And A Few Bolt-On Parts, A Fun Car Becomes The Life Of The Party 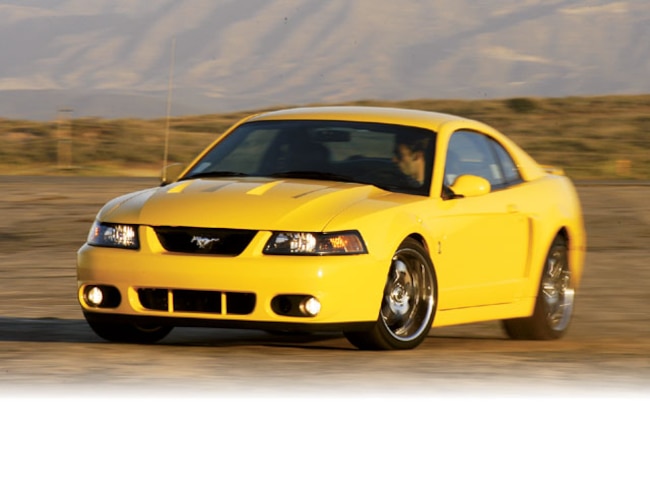 Publicity stunts are often better publicity than good stunts, but the trick you're looking at here is a good one when you get behind its wheel. The idea came from the red-lined imagination of Doug Dwyer at the Bryson-Dwyer public relations agency. He had a big open house coming up at client MagnaFlow's digs, and while he already had everything but the big top and elephants lined up, he landed on the idea of building a hot Mustang with all the swag he could nick from his clients, and with the assembly taking place during just four hours at the open house.

The funny thing is, it worked.

To begin, a late-model SVT Mustang Cobra was procured in the usual way from a local dealer. Doug put some miles on it to break it in, then started working the phone. When he was done, he had American Racing wheels, Yokohama tires, Hotchkis caster/camber plates, a Centerforce clutch, Eibach springs, Bilstein shocks, Baer brakes, an Optima battery, and a K&N air filter sitting on the floor at MagnaFlow. And you get no points for guessing who was supplying the exhaust parts.

On the day of the open house, representatives from the aftermarket companies arrived and installed the bits on the Cobra. We did our usual thing, taking pictures and trying to act employed. Despite our stale jokes, the guys wrenched this beast together in only four hours-well, four hours and maybe another half hour as the MagnaFlow guys had to run next door to their massive manufacturing plant for some overlooked tube (the guy living closest to the party is always the one who shows up late). Figuring we had a good news item in the bag, we packed up and headed home.

After the open house, Doug called to say he was really surprised how well the car turned out, and we should drive it, and so on. A good PR man at work, we assumed, but what the heck, it was a drive in a new Cobra.

Doug was right. While some of his enthusiasm for the car came from the fact he hadn't tried a Mustang Cobra before this one, and that he had just spent three days in this same car driving it through phony brick walls, darn near burying the speedo, and smoking the tires for some K&N television commercials, it really did turn out nicely. The ride is that perfect combination of well-controlled responsiveness, yet is still plush. The tuned-up power is, as always in blown Cobras, smoothly more than adequate. The driveability is stock, the NVH is stock-or so close to stock we didn't notice. The handling is like a cat on carpet. This yellow speedster is about as near-perfect a real world enthusiast's car as we've driven-a car tester's joy.

It makes us wonder what Doug might be building next.

These Good Old DaysMaybe you need to have a few miles on your odometer to fully appreciate this, but one thing this project drove home is just how powerful and reliable modern musclecars are. This Mustang hauls, yet it's dead smooth and it didn't miss a beat after days of hard-core driving for the television cameras. The storied warriors of yesteryear couldn't have kept up and would have broken in half trying.