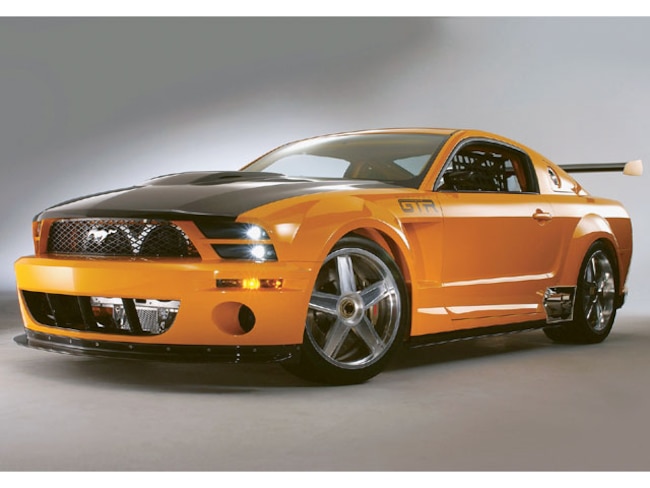 As have you, we've been wondering what the '05 Mustang would look like as a race car. While we'll have to wait to see it with skinnies and slicks for the dragstrip, Ford has taken the guessing out of what a road racer will look like. Inspired by the successful '70 Boss 302 Trans Am cars, the '05 Mus-tang GT-R is a purpose-built race car designed to celebrate the way owners have long modified Mustangs for performance. The car was unveiled at the New York Inter-national Auto Show, a little more than a week before the big 40th Anniversary show in Nashville.

Obviously produced to get the Mustang faithful excited, it certainly works as far as we are concerned. Better yet, it may be a harbinger of things to come. "The Mustang GT-R blends today's breath-taking design, Ford Racing's unmatched history, and the most advanced racing technology into the ultimate Mustang," J Mays, Ford group vice president of design, said. "Mustang's iconic image grew with every checkered flag, so we think the Mustang GT-R is an appropriate tribute to the car's 40th anniversary, and a hint at what's to come."

Since Ford is touting the GT-R as a return to the company's road racing and 5.0 roots, we're hopeful this car could not only be the sign of a turnkey, grassroots racing program they've hinted might be available through FRPP, but also the return of the Boss 302 of which we've been dreaming. Time will tell, but one thing's for sure-the '05 Mustang GT-R concept is sure to get us all juiced about hot-rodding the real thing when it debuts later this year.