Ever Dream Of Owning A Vintage Gt40? Now You Can Live The Dream Every Day With Radio, A/C, And 500 Hp 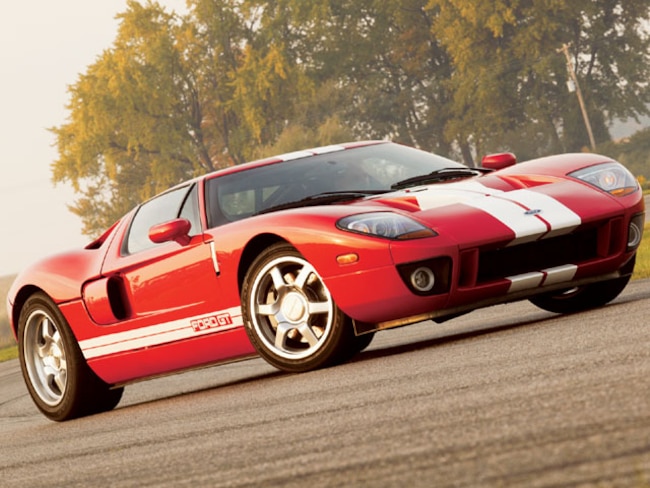 Even if you had no idea the original GT40s dominated racing at Le Mans for four straight years in the late '60s-including the historic 1-2-3 victory in 1966-taking one look at the car would tell you it was something special. The timeless, high-performance lines are like Jimi Hendrix on modern radio. Jimi doesn't sound old and outdated, and the GT40 is sure to inspire awe at any age. Of course, there will never be another Jimi, but thanks to Ford's 100-year birthday party, there will be another GT40, in the form of the '05 Ford GT.

This car began as a show car simply to get the auto press excited about Ford, but Bill Ford thought it would be a great idea to have running cars at Ford's Centennial Celebration.

So, starting from a 5-percent-production-feasible show car, John Coletti's Special Vehicle Team engineering department accepted the challenge to create a modern version of the beloved racer-in less than four months. To make it work, the Ford GT team made extensive use of computer modeling to design and prove out the car. Only about 10 percent of the development used traditional prototypes. This allowed engineers to quickly make changes to turn the show car into a driver.

You see, unlike a traditional car's development, the Ford GT was built from the outside in. The design team, headed by Camillo Pardo, was so enamored of its creation, they fought to make few changes to the show car for its transformation to reality. The design team had already created one design, and then scrapped it for the one that debuted on the show car. The design seen on the final car owed more heritage to the Ford GT Mark II race car. "Freeing ourselves of the fear of creating a car that looked too much like the original was a liberating experience for the team," Camillo says. "But staying true to the original themes in a clean, modern design made it the most difficult project I've ever been involved with."

Ford's brass obviously appreciated the team's modern adaptation of the classic car, as they supported the unique development. You see, the Ford GT is similar yet radically different from the original. Mainly because the car had to be built to fit two people of any size comfortably-rather than one racer-it is 18 inches longer and 4 inches taller. So, the engineering team had to make its hardware fit inside the skin. Only the roof was raised by a scant 17 mm for passenger headroom, which caused a slight revision in the exterior styling.

Fred Goodnow-design, engineering, and launch manager-explained the challenge. "Usually, a new vehicle is designed from the inside out, meaning that the chassis and suspension points are set before the exterior body is designed around those dimensions. In the case of the Ford GT, it was exactly the opposite. We had to engineer within the given exterior parameters."

Of course, it's difficult to see the difference in the cars, as few of us have seen two of the cars next to one another. Fortunately, when we traveled to GingerMan Raceway in western Michigan to drive the Ford GT, Ford had borrowed a private-owner GT40. Going back and forth between the two, you could quickly see the Ford GT is much larger and far more modern in every way than the original. This is to be expected, but the original car always looked so ahead of its time, the job Ford designers did was all the more impressive.

While the exterior styling is similar, inside the two cars differ radically. The GT40 was a purebred race car outfitted with only the necessary instrumentation and seating to get the job done. Meanwhile, the Ford GT's interior is much closer to a luxury spaceship cockpit than a vintage racer. Ford's latest interiors have come a long way, and all that computer modeling really seemed to help the car's ergonomics. The seating position is easily adjustable for comfort, the gauges are easy to read, the shifter is in just the right spot, and the only challenge to driving the car daily is to remember not to hit your head on the door when you stand up. Of course, for most of you, creature comforts are the last concern in a car such as this. How does it feel when driven in anger, you ask? Let's just say it runs better than it looks.

Strapping in and turning the key doesn't bring the GT to life-you still have to engage the push-button start. It's an extra step, but-boy-does it make you feel like you've gotten a free pass into James Bond's Q toy box. The blown 5.4 purrs to life right behind you, and it idles as a thoroughly modern blown modular should. But there's been an obvious effort to keep the noise down in the cabin. You can hear the engine, but just enough to know it's there. Once you get the car up to speed, you're more apt to hear a fusion of blower and exhaust noise, but nothing to keep you from driving any distance.

Getting up to speed, of course, is the fun part. We had to gently join the road course to avoid collisions before taking the car to Warp 9, so we never got to stand on it from a standstill, but we're sure it has no problem turning those 315/40ZR19 Goodyears into an impromptu smoke show. Most striking about the package is how smooth it is. It's a modular after all, but for some reason we expected something between the torque hit of a Lightning and a Viper. Instead, this thing just starts pulling and doesn't stop until the rev limiter. Power is not a problem, but the speed is deceptive, as the car topped 115 on the big straight at GingerMan.

Handling was quite balanced and capable for a midengine car with 500 horses and 500 lb-ft on tap. The car was easily controlled and forgiving of all but the most boneheaded driving errors (speaking from experience here). Perhaps the only disadvantage is the tires seemed to give up suddenly at the edge, but we were so far from the edge most times it hardly mattered. When you're driving a $1 million preproduction version of a $150,000 car, the last thing you want to do is get up-close and personal with the wall.

Our only complaint about the entire car was the notchy shifter. We drove both the red and the blue prototypes-one was better than the other, but the engineers repeatedly promised the shift linkage would be improved on the final production cars. The prototypes offered vague, almost cablelike shifting. We'd prefer a much more positive shift in a car with such impressive performance attributes.

One attribute that outshone all the others was the braking. Just the slightest tap of the pedal and the anchors were out, easily slowing down this car from 100-plus mph. We never pushed the car as deeply into the braking zones as it was capable of going, and as such it took some time to adjust to heel-toeing in the car. Still, having such awe-inspiring brakes was something we'd gladly get used to. As too much power is just right, too much braking just isn't possible. To give you an idea of how impressive they are, the brakes easily overshadowed the Ford GT's power.

So there you have it. Your drool is justified. For those who can afford it, it'll be a $150,000 bargain that Ford PR says will outrun those $180,000-plus Lambos and Ferraris. If you can buy one, do so. Otherwise, just add the Ford GT to your post-lottery to-buy list. I have a feeling that with only about 1,000 units being produced, this Ford GT will be fondly remembered in 40 years too.