The Similarities End With the Four-Valve 4.6 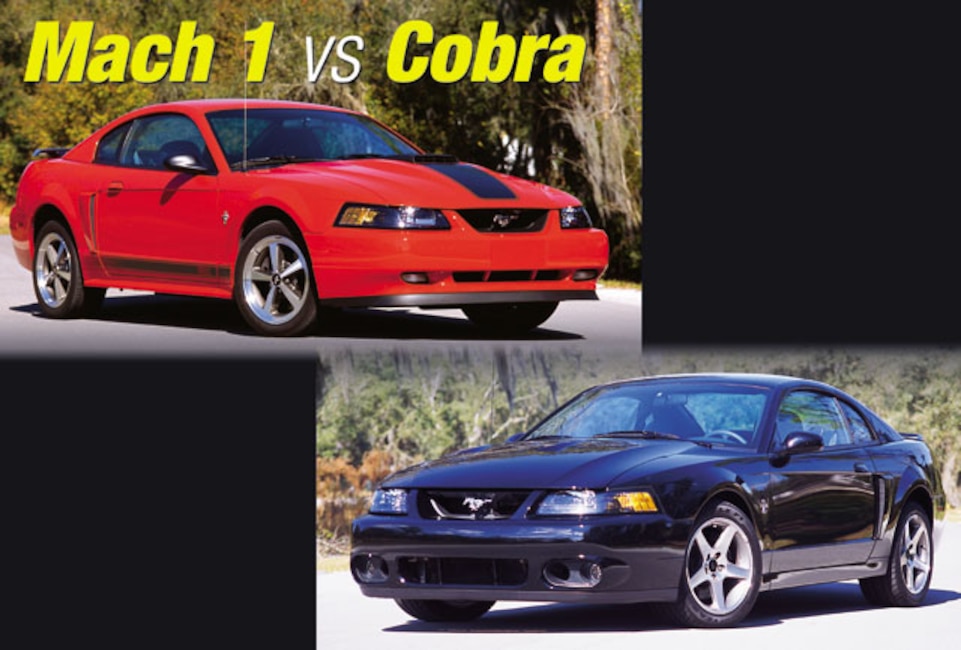 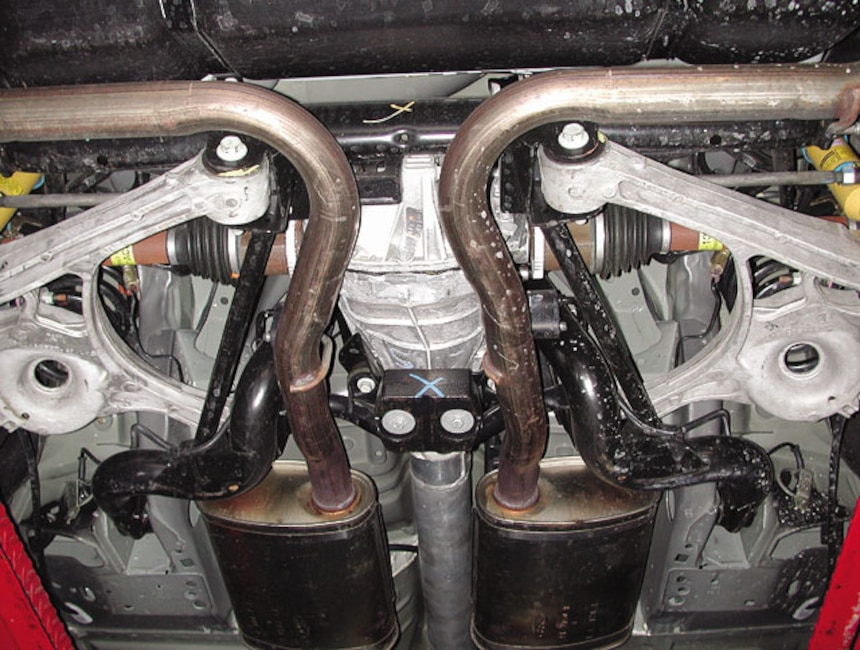 The Cobra's independent rear suspension contributes much to the refined driving characteristics. With the IRS, the Cobra sticks to the turns and glides over highway imperfections without the typical Mustang live-axle harshness. 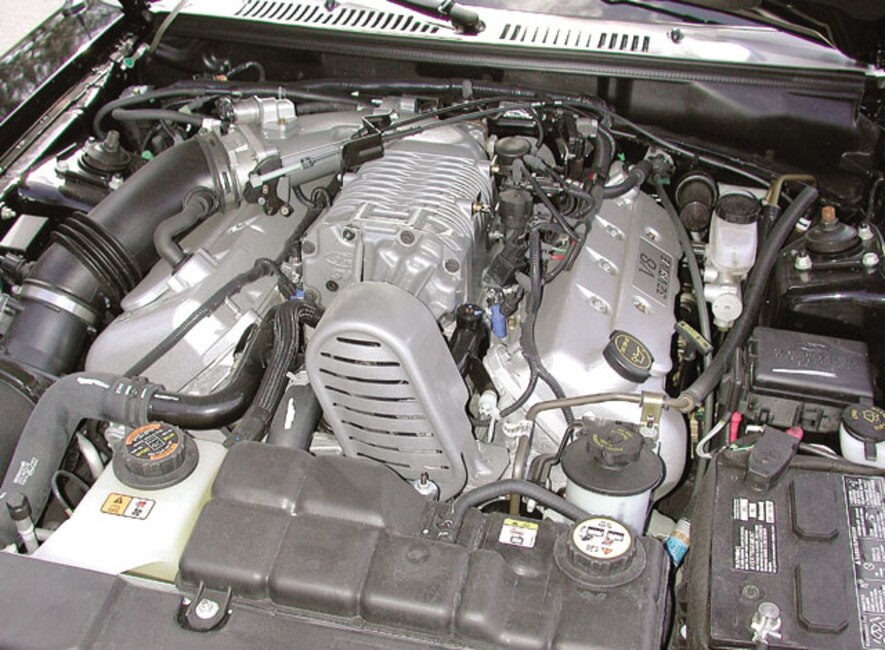 Thanks to its Eaton supercharger, the Cobra's 4.6 DOHC engine churns out 390 hp. More important for the seat-of-the-pants is the 390 ft-lb of torque at a low 3,500 rpm. Touch the throttle and this thing moves out! 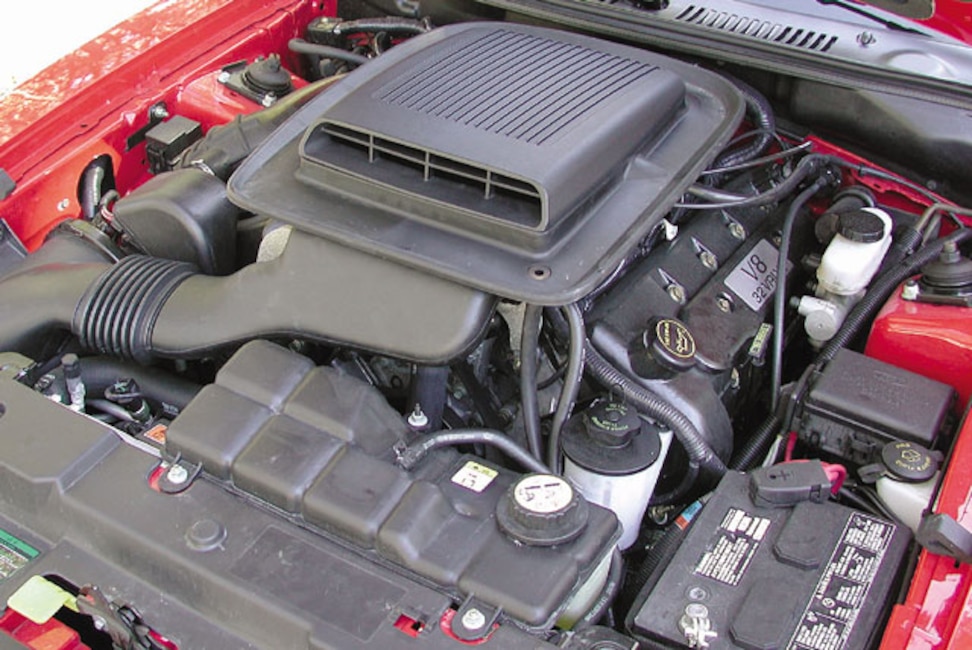 Although similar to the 4.6 DOHC used in the '01 Cobra, the Mach 1's powerplant has been enhanced with high-flow four-valve heads, new performance cams, and improved exhaust manifolds. Low-end torque doesn't match the Cobra, but it screams at higher rpm. 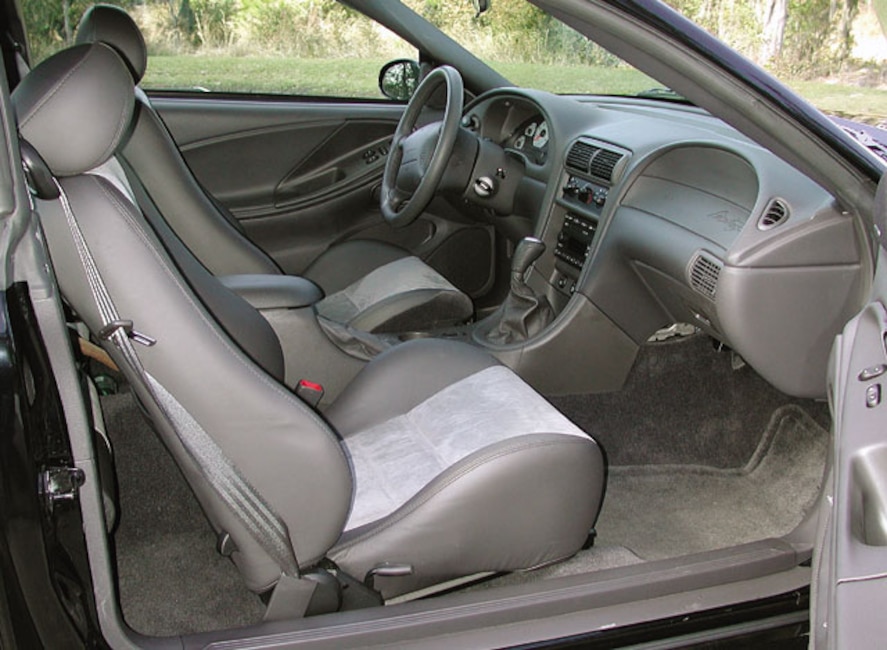 With its Nudo leather trim and Preferred suede inserts, the Cobra interior is plush compared to the Mach 1's more stark '60s-like treatment. 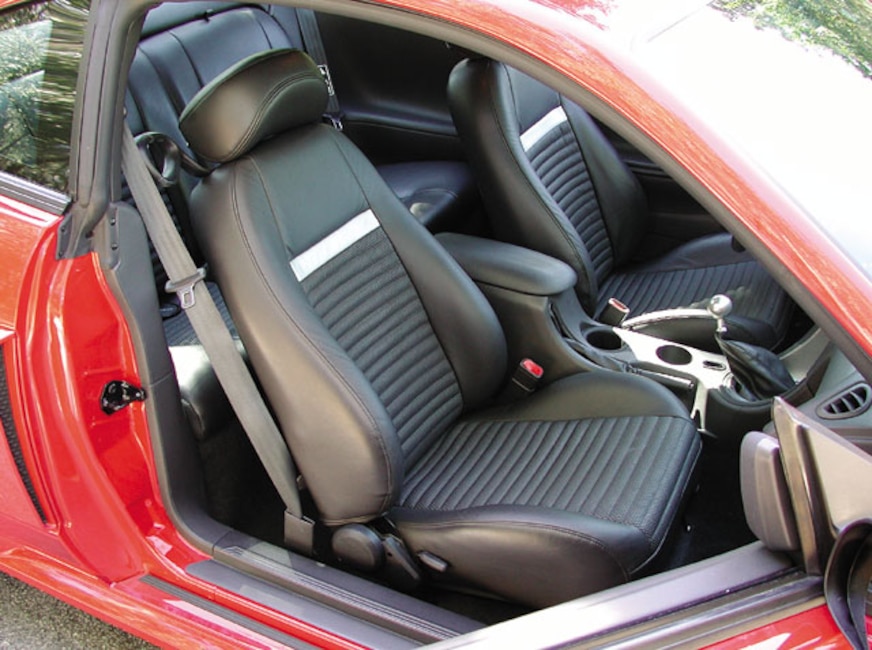 Part of the Mach 1's appeal is its vintage design cues, like the '69 Mach 1-style seats with Comfortweave leather. 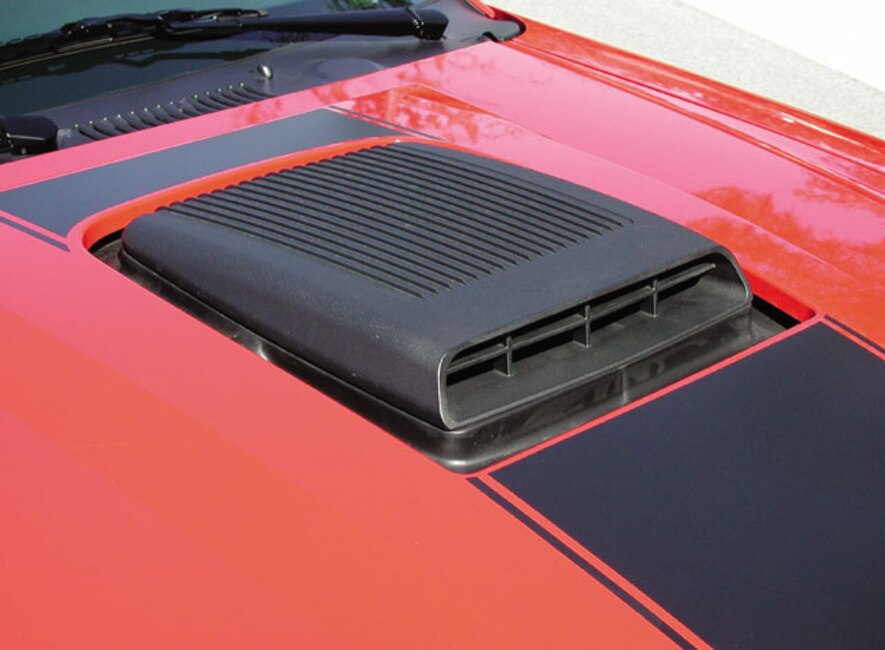 We never expected to see a Shaker scoop again, but Team Mustang felt it was an important part of the Mach 1 heritage. It's definitely functional. Team Mustang engineers tested a prototype Mach 1, with and without the scoop, at an '02 Fun Ford Weekend and reported quicker quarter-mile times with the scoop. 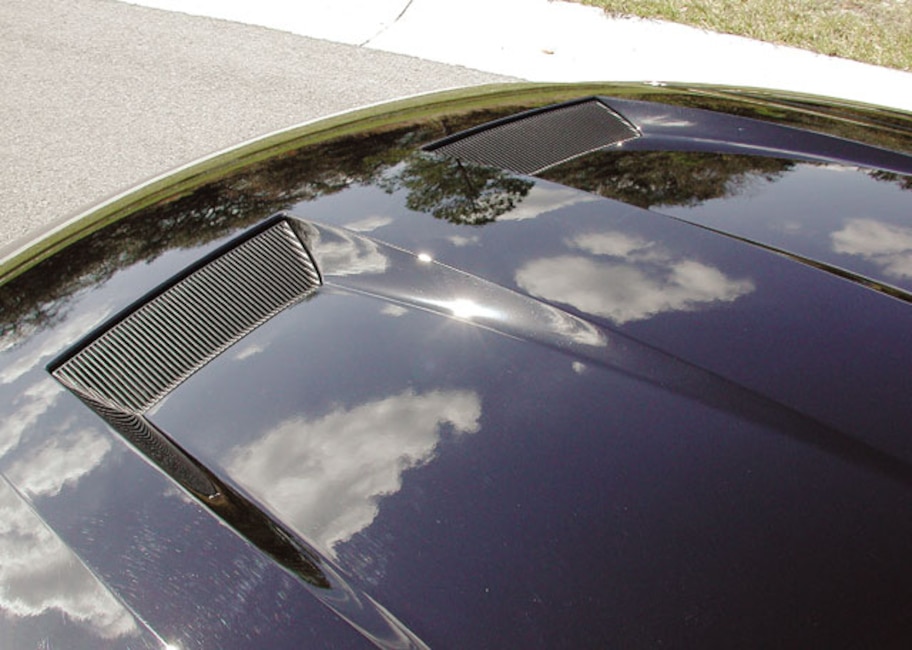 While certainly not as gregarious as the Mach 1's Shaker scoop, the Cobra's hood vents are functional, opening into the engine compartment to allow hot underhood air to escape. 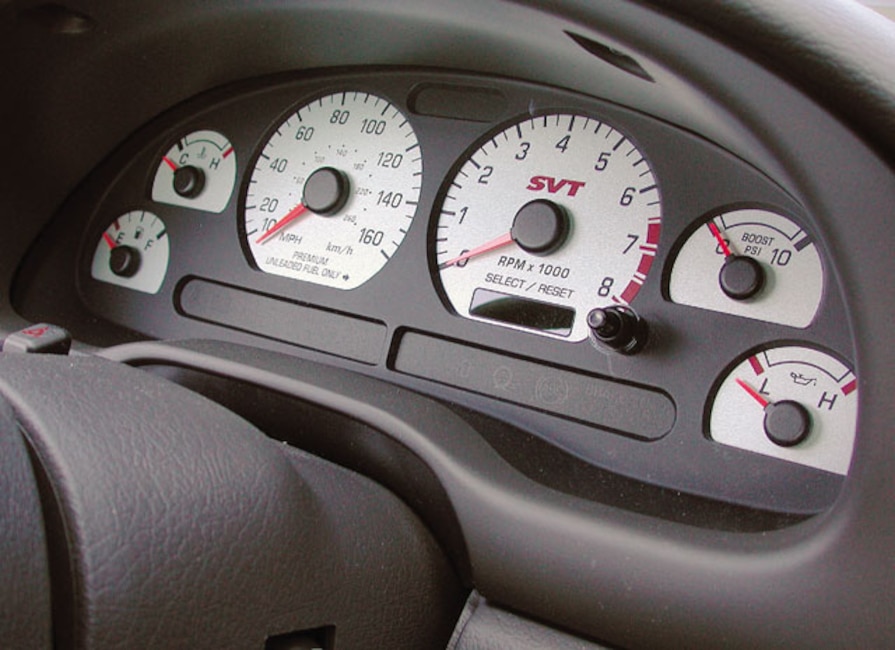 The Cobra comes with white-face gauges. 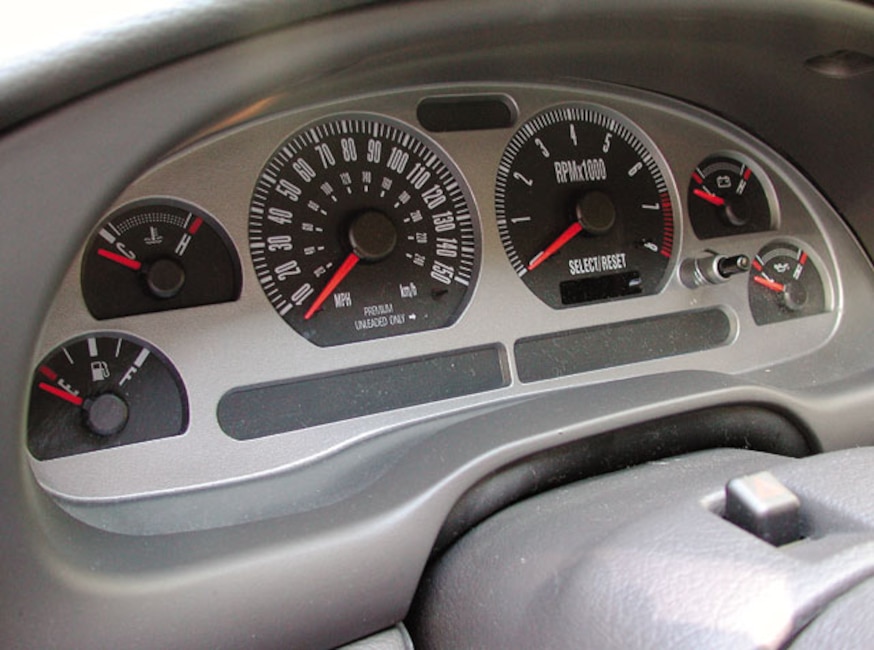 The the Mach 1 borrows the vintage-face gauges from the '01 Bullitt. Upshift light was annoying in a car like the Cobra. 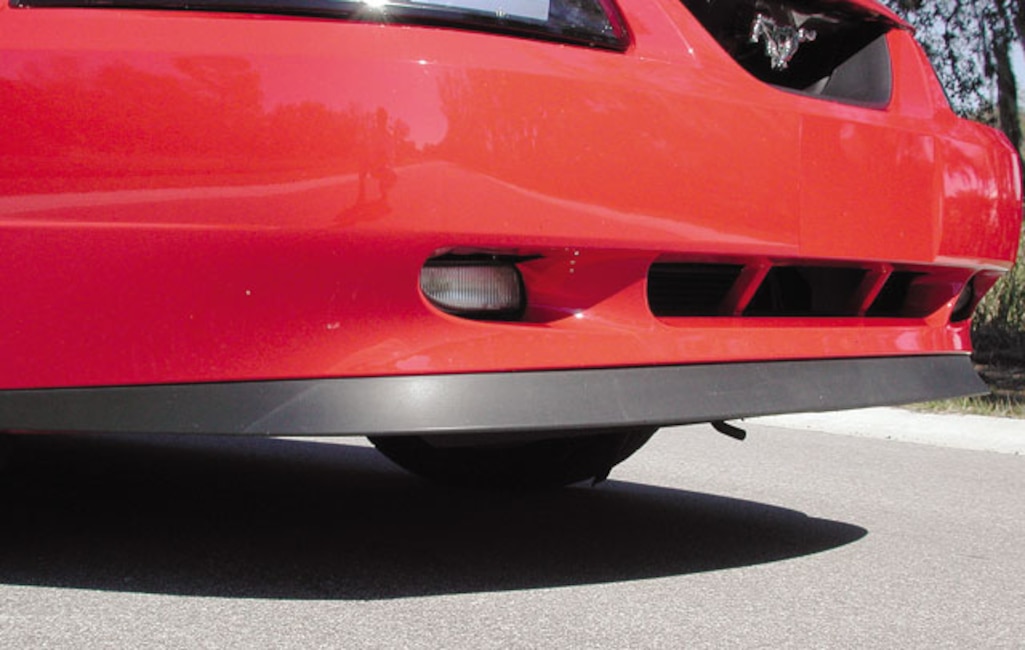 A chin spoiler is unique to the Mach 1 package. 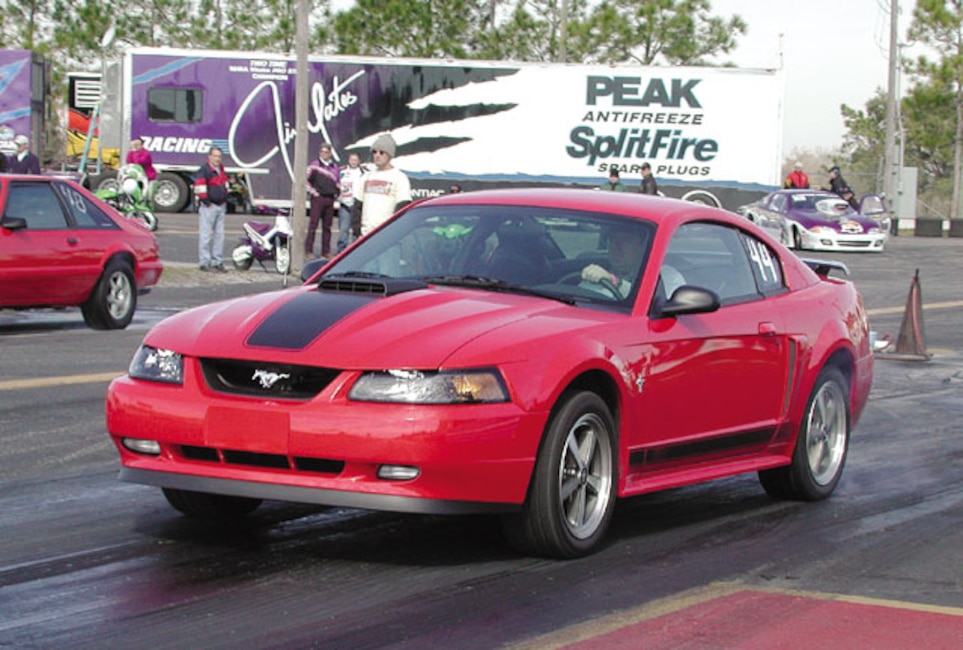 Model year 2003 will no doubt go down in Mustang lore as one of the best years ever for Mustang performance. Not since the '68-'71 era of Cobra Jets and Bosses have we seen such a powerful arsenal of machinery, a lineup that also includes the base GT with its 260hp SOHC 4.6 and, arguably, even the base V-6 model with its 190 hp--almost as much as the first 5.0 High Outputs in the early-'80s.

While the GT Mustang certainly commands respect in performance circles, the crown jewels of 2003 are the Cobra from SVT and the special-edition Mach 1 from Team Mustang. Both cars feature the four-valve 4.6 DOHC engine under the hood, but that's where the similarities end. The Cobra, with its independent rear suspension and supercharged 390 hp, is a refined touring vehicle, while the Mach 1 comes across as a back-street brawler, its Shaker scoop and throatier exhaust just screaming for red-light challenges.

Recently, we had the chance to spend a couple weeks, back to back, in both a Mach 1 and a Cobra. The difference in personalities between the two cars--both Mustangs, both with DOHC 4.6 power--amazed us.

Rockin' Mach
With its name, hoodscoop, and other vintage characteristics taken from its '60s namesake, the '03 Mach 1 arrived at our offices first, which probably wasn't fair to the Cobra. We instantly fell in love with the Mach 1's aggressive exhaust note, buttery-smooth shifter, and high-winding engine. In fact, the car felt, sounded, and performed more like a '69-'70 Boss 302 than a big-block '69-'70 Mach 1. With the Shaker scoop in full view from the driver's seat, the only thing the car needed was a Hurst T-handle shifter to finish off the effect.

For a car built for straight-line performance, the Mach 1 felt surprisingly nimble and light on its feet. The vintage-style bucket seats offered plenty of comfort and support, although the seatbelt came directly in contact with the keypad on our belt-mounted cell phone, causing a couple of errant phone calls to friends, who, upon answering, heard nothing more than the Mach 460 stereo and Mach 1 exhaust tone.

Some people assume that the Mach 1's four-valve engine is identical to the DOHC 4.6 used in the '01 Cobra. True and false. Basically, it's the same engine, except for the Mach 1, Team Mustang enhanced the performance with high-flow four-valve heads, higher compression, new cams (from the 5.4 Navigator, reportedly with the same lift as the '01 Cobra cams but with different overlap and duration), revised calibrations, and improved exhaust manifolds that are also port-matched to the heads. The result is, well, actually less advertised horsepower than the '01 Cobra--305 to 320--something that may be attributed to the Cobra's marketing status as the top-of-the-line performance Mustang.

On the street, the Mach 1 feels strong, especially at high rpm where the four-valve heads can strut their stuff. At around 3,000 rpm under full throttle, you can feel a surge in power, almost like the secondaries opening on an old Holley four-barrel carburetor. For those of us who grew up with musclecars, the Mach 1 under acceleration has a familiar feel.

We did have a chance to test our five-speed Mach 1 press vehicle on the dragstrip, making a pair of back-to-back passes during a Bradenton (Florida) Motorsports Park test and tune day. Forgetting to turn off the traction control on the first run resulted in a time-killing bog when the rear tires spun on the first-to-second shift, although we were impressed the car still managed a 13.81 at 102.40. With the traction control off on the next pass, the Mach 1 responded with a 13.54 at 103.14. We've heard about other Mach 1s dipping into the 13.20s with more experienced drivers.

Cobra Refinement
When jumping out of the Mach 1 and straight into the '03 SVT Cobra, two things were immediately apparent. The supercharger makes a big difference, especially at low speeds, and the Cobra feels heavy in comparison to the Mach 1. If the Mach 1 is a street brawler, the Cobra is a well-heeled Mafia hit-man--dapper but dangerous.

We can't say enough about the Cobra's supercharged power. Just ease into the throttle, and the Cobra surges forward in a luscious rush of torque. Need to pass a slow moving tractor-trailer? Don't even worry about downshifting. Heck, you'll only need part throttle. At full throttle, the sensation and sound of shifting through the six gears can be compared to an Indy car; the shifts come fast and furious, while the Eaton supercharger emits a mechanical whine that mixes with the toned-down exhaust.

More food for thought: Rated at 390 hp and 390 ft-lb of torque, the '03 Cobra is the most powerful Mustang ever offered to the public. Unfortunately, our limited time with the Cobra did not coincide with a dragstrip date, so we were unable to obtain quarter-mile times. However, our sister magazine, 5.0 Mustang & Super Fords, ran a string of low 13-second e.t.'s, including a 13.04, with a stock '03 Cobra.

It's also the most refined Mustang ever offered. Settling into the gorgeous leather with suede seats, you are surrounded by unpretentious refinement. Unlike the Mach 1, with its loud colors, Shaker hoodscoop, and side stripes, the Cobra comes in mainly subdued hues (Torch Red and Zinc Yellow being the exceptions) and features subtle hood vents (functional, by the way, for releasing underhood heat) and non-obtrusive identification, like the snake emblems on the fenders and the embossed "Cobra" on the rear bumper cover. Some Cobra owners have complained that the car is too introverted. We suppose if you spend $35,000 or so for the top-dog Mustang, you want people to notice.

In addition to the supercharged engine, the Cobra's two other stand-out features are the independent rear suspension and the six-speed T56 manual transmission. While the IRS keeps the Cobra planted in turns, it also provides a tremendous improvement in the ride quality. With each rear wheel working independently, unlike the live rear axle on all other Mustangs, including the Mach 1, the Cobra glides over rough roads, pot holes, and bumps.

The six-speed is a nice addition to a luxury touring Mustang like the Cobra. However, we were disappointed by the notchy feel in the shifter, something that other reviewers have pointed out as well.

Year of Performance
With both the Mach 1 and the supercharged Cobra in the lineup, 2003 will go down as one of the Mustang's best years ever for performance. Granted, the '68-'71 era had a wider array of performance engines and options, but today's hot Mustangs are arguably faster and quicker. Plus, they are available with amenities like air conditioning, powerful sound systems, and convenience items like power windows and cruise control.

So which is best? Mach 1 or Cobra? That may depend upon your personality.