Prior to his passing in May of 2012, Carroll Shelby told me that in order to remain a viable business on a going-forward basis, Shelby American could not live on building and modifying Mustangs alone. Thus, considerable time, money, and effort has been invested into building Shelby Performance Parts.

Yes, the company still builds and sells Cobras and Super Snakes, but there is now way more to the Shelby offerings. His product development boffins—among which he was the most ardent—have sifted through the Ford lineup for platforms appropriate for the Shelby touch. The company found the Focus and now produces a Shelbyfied model—but it doesn’t stop there. The SVT Raptor pickup has been added to the lineup. A Shelby off-roader? Why not.

The 2013 Ford F-150 Shelby Raptor we tested started out as a '13 6.2-liter Raptor (the 5.4-liter model is not eligible). Power adders are a must, and that comes primarily in the form of a Shelby/Whipple supercharger and intercooler setup, which amps the horsepower from the stock 411 rating to a more Shelby-like 575.

The cabin gets a Shelby inspired tuneup, including the requisite Shelby logos and serialized ID plate. The dash has fuel pressure and boost gauges niftily engineered into the AC vents. You can get the Shelby treatment on any 6.2-liter Raptor, in either extended-cab or full quad-cab bodystyles, with a choice of two graphics packages in white, matte black, silver, Azure Blue, or red.

One aspect of the Raptor that Shelby wisely left alone is the SVT-developed suspension. Its amazing Fox-brand off-road shock absorbers and special spring rates offer an unbeatable combination of ride, handling, body control, and off-road compliance. It realistically can’t be bettered for someone wanting to preserve the Raptor’s combination of off-road capability and on-road friendliness.

Before hitting the dirt at Bridgeport, Texas, fabulous OHV Park (for a small fee on Saturdays and Sundays, you can play with your two-, three-, or four-wheel off-roader), we drove the Shelby Raptor on the freeway and side streets just to get a feel for its every day nature, which is friendly and very fast.

The stock 6.2L gets the job done under normal circumstances, but that just wouldn’t be Shelby enough. The blower package delivers an intoxicating blend of power, plus intake, exhaust, and blower noise. The engine rumbles at idle, and is fairly quiet on the cruise in the low rpm, but barks and howls when you dig deeply into the right pedal. The combination of blower whine, intake, road, and exhaust blend to remind you (and everyone else) that there’s something special under that big hood.

Need to pass on a hill? You can control the six-speed automatic via its manual mode, or summon Third gear and strong power with the throttle. Considering this rig weighs every ounce of 6,000 pounds, its acceleration is fierce, yet absolutely manageable. It’s only natural that the knobbly off-road rubber creates a bit of nibbling on the highway and its own extra measure of road rumble, but it’s not over the top, and the aggressive tires soon proved their worth on the 305 acres of trails, rutted hard-pack, water, and mud that awaited us.

Average trails are traversed in 2WD High, as the long travel, compliant suspension, and beefy rubber were up to the job. When the going got tougher, 4WD High was usually all that was needed; we also experimented with the Raptor’s Off-road Mode and 4WD Low, but they were seldom needed. Hill Descent (HDC) is a wonderful bit of computerized magic. We pointed the Raptor’s big face down some pretty aggressive inclines and let the HDC crab us down the hill in complete control, with no throttle or brake modulation required.

Who doesn’t love water crossings, and the Shelby Raptor certainly didn’t mind them. There were a couple instances where the front bumper was fully submerged, and the tires were walking on soft silt or sand under water. The truck remained sure-footed at all times, and never failed to pull itself out of the muck or up and over any hill we attacked. Naturally, there’s power to spare, and the tallish ground clearance and impressive breakover angles keep the Raptor true to its off-roading mission.

What does all this power and beauty cost? The Raptor bases at around $42,000; fully loaded examples like our Crew Cab are more like $52,000. Add to that the Shelbification process of $17,995 and you have one awesome on and off-roader. Modulate the factory options just a bit, add in the optional Shelby wheels and Goodrich tires, and you’re likely talking about $70,000—but it will have all the mods you’ll need. You could easily spend that for a no-name-tuner Raptor or Super-Duty–based special.

Why go that route when you can have a well-engineered, smartly integrated, Shelby-American-built Raptor that blends significant name recognition and cache along with certain collectability? More importantly, this truck feels factory-engineered at every level, handling everything we could throw at it with nary a burp or hiccup along the way or showing a single bad habit.

Special thanks to the city of Bridgeport OHV Park (www.cityofbridgeport.net). 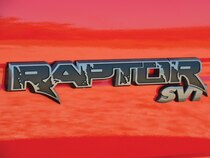 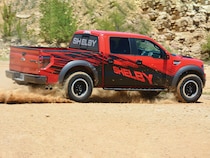