We don't often test front-drivers, but when we do, they are often turbocharged, fast, and affordable.

Ford's Focus ST hit the street recently with a blaze of style and performance. The Focus ST is the first global performance vehicle available from the Dearborn-based automaker, and enthusiasts anxiously awaited its arrival. Likewise, we were eager to lay our mitts on the 252hp Ecoboost-powered fun machine. We got our chance last fall, when we drove the little wonder aggressively through the bending countryside near Ann Arbor, Michigan. We waited to report because we wanted to get at 2013 Focus ST to a dragstrip as part of the test.

Slathered with attributes, the ST impressed us, both on and off track. The latest hi-po Foci is abound with performance—from the menacing trapezoidal grille and low fascia, to the optional Recaro chairs and torquey Ecoboost I-4 engine that knocks down 32 mpg on the highway and 23 around town. It even has a nifty engine tone to go along with the power and is a worthy successor to the short-lived SVT Focus that departed in 2004.

Peeling down the designated drive route, we exercised the 2013 Ford Focus ST engine's boost potential and the stout 270 lb-ft of torque that comes on amazingly low, at 2,500 rpm. Power is there where you want it when you want it. 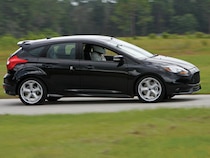 "The Focus ST has been designed to appeal to driving enthusiasts the world over," said Hermann Salenbauch, director of Advanced Product Creation and Global Performance Vehicles. "Our global performance teams based in North America, Europe, and Asia have worked together to develop the core product attributes—steering, driving dynamics, sound quality, and power enhancements—for all Ford ST models, including interior and exterior differentiation. Our engineers were able to apply that global DNA fingerprint to the new Focus ST and deliver a distinctive sporting personality all its own," he added.

The ST's 'plant is a direct-injected 2.0-liter with Ti-VCT (variable cam timing) and—with a low-inertia (intercooled) turbo—produces over 20 psi, and that's never a bad thing. The engine features all-aluminum construction and low-friction internals, and according to Ford, it will run 154 mph, and tops the MazdaSpeed3 and VW GTI with manual transmissions in mpg.

Combine the spirited engine with a grip level that is shockingly good, plus the utility of a five-door hatch, and you have a car that's a treat for everyday driving or track-day fun. We especially liked the support and comfort of the optional Recaro front seats, the thick steering wheel and the sporty gauge layout.

Another benefit is the upscale feel—you can see and touch the quality in the switchgear, the materials, even the noise it makes when you shut the door says "this car is solid." Now add the connectivity with SYNC, My Touch, optional voice-activated navigation, and you have an honest world-beater.

Then there's the pricing. Amazingly, Ford is offering all this goodness (in the base ST) for just over $24,000, including delivery and destination charges. Our tester had the Recaro seats, MyFord Touch with navigation and Sirius radio, and stickered at $28,290. The ST is a viable option for first-time performance-car buyers or anyone wanting great economy, sportiness, and a hatch.

If you like adventure on the twisties, road, or track, this may just be the car for you. "From the driver's seat, customers will experience the new-developed Ford Sport Steering System. This variable-ratio steering rack is designed to increase the agility of the Focus ST on winding roads, yet still inspire the same high-speed confidence," said one Ford engineer.

"The unique system makes steering less sensitive when driving in a straight line, but increases the feel during cornering. Drivers can keep their hands firmly gripped on the steering wheel through tight hairpins, maximizing their control over the vehicle. It also has benefits in slow-speed situations, such as tight parking maneuvers, with less input needed from the driver to direct the vehicle into the space."

We found the ST to be sporty and fun, the only negative being a fair amount of torque steer that was most noticeable in First gear. It was also pronounced when tracking out after an apex and going to full power. Despite the torque steer, the ST grips and goes. There was no noticeable cornering slip; in fact, the massive traction of the tuned suspension and Goodyear tires inspires a confidence.

"Wrapped around the alloy wheels are high-performance 235/40R18 Goodyear Eagle F1 Asymmetric 2 tires, developed after rigorous testing on all kinds of road surfaces and conditions, including the Nürburgring Nordschleife in Germany," states Ford.

In addition, the balance is neutral, which was to our liking. The ST grabs the road and turns, it is hunkered down and digs into the pavement. Turn-in is instant and accurate, and when you brake to set the nose, it corners with amazing speed. We often found ourselves thinking we could have cornered harder.

I recommend sliding in for a test drive at your local Ford dealer. Once you do, you'll come back smiling. The Focus ST is economical and quick on the track, and the Tangerine Scream will let everyone know you are coming. Of course it's also offered in Performance Blue, Race Red, and White.

If you like adventure on the twisties, road, or track, this may just be the car for you.

With a spirited power-to-weight ratio and great grip, the ST is suited nicely to on-track adventures. While we didn't push our tester on a real road course, our "unofficial" test track was used to note handling and cornering performance. We did, however, get to strip-test the turbo wonder, as our in-house answer man, Yo! Ken Miele purchased his own shiny white ST.

Miele took his hot hatch to Atco Raceway (Atco, New Jersey) for quarter-mile testing. "I realized quickly that you can't launch above 3,000 rpm or you get wheelspin and the dreaded clunk caused by the soft lower motor mount. To remedy this, people are installing the Focus Electric motor mount, which is inexpensive at $60," Miele adds. He noted that 2,500 rpm provided the sweet spot for optimal launches.

With more seat time or in better weather (DA was corrected to 2,500 feet), it would certainly be a 13-second player. And with that, look for us to dial in this ST with some mods and shoot for the 13s or quicker.